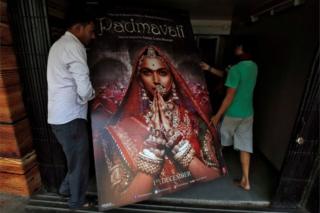 The film, which tells the story of a 14th Century Hindu queen and a Muslim ruler, has sparked nationwide protests by Hindu and caste groups.

However the Central Board of Film Certification (CBFC) told local media it had not recommended any cuts.

In November India's top court rejected an appeal by a lawyer to block the film's global release.

Hindu groups and a Rajput caste organisation allege that the movie, directed by Sanjay Leela Bhansali, depicts an intimate romantic scene between the two characters, although the producers of the film deny this.

The censor board said it had appointed a special board to consider protesters' concerns and said these had been "discussed at length", it said in a statement.

"The film was approached with a balanced view keeping in mind both the filmmakers and the society," the statement said.

The board's suggested modifications include changing the film's name to Padmavat, after the 16th century epic poem of the same name that the film is based on.

However CBFC chairman Prasoon Joshi told NDTV that no cuts had been suggested for the film.

Rumours about a scene in the film of the Muslim king dreaming of a romantic tryst with the Hindu queen have enraged many, including the Rajput Karnik Sena, a fringe caste group that has called for the film to be banned.

The group had disrupted shooting and one member had slapped Bhansali on the set earlier this year. Others vandalised cinemas and threatened to chop off Padukone's nose, referring to an incident in another epic, Ramayana, where a character has her nose cut off as punishment.

The group also held protests against the film in several states and Rajput community members have burned effigies of Bhansali.