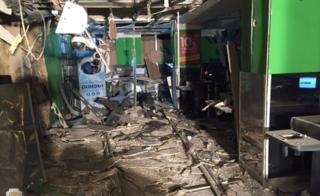 Russian authorities have arrested a suspect they believe carried out Wednesday's bombing of a supermarket in St Petersburg that was claimed by so-called Islamic State (IS).

The Federal Security Service (FSB) said it had detained the "organiser and executor" of the blast, Russian news agencies reported.

The bombing at the Perekrestok branch injured 13 people. IS has not released evidence that proves it was behind it.

The FSB did not name the suspect.

President Vladimir Putin has described the blast as a terrorist act. He signed a new law on Friday toughening sentences for terrorist recruitment.

IS has recruited thousands of fighters from Russia and former Soviet states and President Putin has previously warned of the dangers they pose if they return home.

Russia's intervention in the Syrian war on the side of the government is believed to have made it a key target for IS and other militant groups.

Russian officials described the bomb as a home-made device packed with lethal components that produced a blast equivalent to 200g (7oz) of TNT.

The bomb was hidden in a rucksack placed inside a locker used by shoppers to store their bags, Russian media reported.