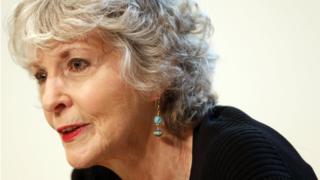 "She was surrounded by family, including her devoted and adoring husband Steve," she said.

Grafton worked as a television screenwriter before finding widespread success as a crime novelist.

Her series of murder mystery novels, each beginning with a different letter of the alphabet, have been translated into 26 languages and regularly topped best-seller lists in the US.

Hello Dear Readers. This is Sue's daughter, Jamie. I am sorry to tell you all that Sue passed away last night after a…

"As far as we in the family are concerned, the alphabet now ends at Y," her daughter said in a statement posted to Facebook.

"Although we knew this was coming, it was unexpected and fast. She had been fine up until just a few days ago, and then things moved quickly. Sue always said that she would continue writing as long as she had the juice," she said.

Grafton received numerous awards for her work including from the British Crime Writers' Association and the Mystery Writers of America.

Detective fiction author Sara Paretsky said her writing had been "closely twined" to Grafton's. Both writers featured female private investigators in their work.