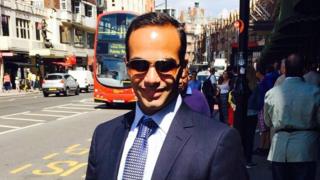 The investigation into possible connections between Russia and Donald Trump's presidential campaign began after a tip-off from Australia, the New York Times reports.

The newspaper alleges the revelation came "during a night of heavy drinking" in London in May 2016.

The New York Times report claims that the exchange was the spark for establishing a secret investigation into possible connections between Russia and the Trump campaign in July 2016.

The newspaper's story cites four anonymous American and Australian foreign officials "with direct knowledge of the Australian's role" as its source.

The BBC has not independently verified the claims.

Who is George Papadopoulos?

Mr Papadopoulos has already pleaded guilty to lying to the FBI about meetings arranged while he was working with the Trump campaign.

The FBI's original investigation has since been handed off to special counsel Robert Mueller's probe, with which Mr Papadopoulos is now cooperating.

The White House has attempted to portray him as a "low-level volunteer" with little influence within the campaign.

However, Mr Papadopoulos is known to have attended several meetings with Mr Trump and other senior officials such as Attorney General Jeff Sessions, as well as meeting a British foreign office official and arranging high-level meetings.

Mr Papadopoulos was told by a contact with Russian links that Moscow had "dirt" on Mr Trump's Democratic opponent Hillary Clinton in the form of "thousands of emails" in April 2016 – something revealed earlier this year.

But the New York Times now reports that weeks later, in May, Mr Papadopoulos was speaking to Alexander Downer, Australia's High Commissioner to the United Kingdom, at an "upscale London bar" when he revealed the existence of the Russian information.

It is not clear why Mr Papadopoulos chose to share his knowledge with Mr Downer, but the Times reports that the Australian diplomat passed the information to his government.

Once that happened, the newspaper said, "the bureau opened an investigation that became one of its most closely guarded secrets".

"Senior agents did not discuss it at the daily morning briefing, a classified setting where officials normally speak freely about highly sensitive operations."

The newspaper reports that corroborating intelligence from other friendly governments, including the British and the Dutch, helped drive the investigation.