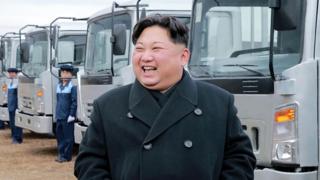 The Panama-flagged tanker, which is named Koti, is being held at a port near the western city of Pyeongtaek.

South Korea has already impounded a Hong Kong-registered ship it suspects of secretly transferring 600 tonnes of refined oil to a North Korean vessel.

The UN imposed sanctions on the North in response to its weapons programme.

The latest vessel seized, which has a mostly Chinese and Burmese crew, is a 5,100-tonne oil carrier, South Korean news agency Yonhap reported.

South Korea revealed on Friday that it was holding the Hong Kong-registered Lighthouse Winmore.

That ship entered Yeosu port in South Korea on 11 October to load up with refined oil and left for Taiwan four days later.

But instead of going to Taiwan it transferred the oil to a North Korean ship and three other vessels in international waters on 19 October, South Korean officials were quoted as saying.

The Lighthouse Winmore was seized when it returned to Yeosu in November and remains in South Korea.

In a tweet, Mr Trump said that China had been "caught red-handed".

He said there could never be "a friendly solution" to the North Korea crisis if oil was allowed to be exported to Pyongyang.

Beijing, which earlier this month supported the US-drafted UN resolution that includes measures to slash the North's petrol imports by up to 90%, denies the allegation.

The resolution bans ship-to-ship transfers of any goods destined for Pyongyang.

IcetruckDecember 31, 2017
Like story:
tweet
Rebels storm Indian paramilitary camp in Kashmir; 8 dead
The new year is rung in from Australia to the Middle East