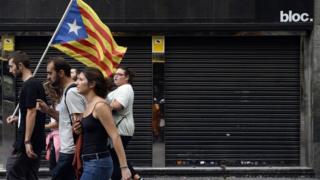 Spain's Economy Minister Luis de Guindos has put the cost of the Catalan independence crisis at around €1bn (£890m; $1.2bn).

He told Spanish radio that it was due to the slowdown in the Catalan economy after the unauthorised independence referendum on 1 October.

Madrid's warnings about economic damage were a big part of its campaign against Catalan separatists in last month's regional election.

But this is the highest estimate yet.

Mr de Guindos said growth in Catalonia had slowed from 0.9% to 0.4% in the fourth quarter.

"Catalonia used to have growth above that of Spain, it was one of the drivers of the Spanish economy," he told Spanish radio.

"However, in the fourth quarter, it's become a burden."

Some 3,100 firms have moved their headquarters elsewhere as a result of the uncertainty.

Far from resolving the crisis, December's election highlighted the even nature of the region's split into pro-independence and unionist sides, and set the stage for further confrontation.

The separatists are best placed to form a new administration, with separatist groups winning 70 of 135 seats in parliament. However, the Ciudadanos (Citizens) party won the popular vote.

The region's former leader Carles Puigdemont – who is in self-imposed exile in Brussels – leads one of the separatist parties. His erstwhile deputy Oriol Junqueras – who is in jail in Madrid – heads another.

Mr de Guindos urged the separatists to abandon the "unilateral way" and focus on the "basic necessities" of Catalan society.