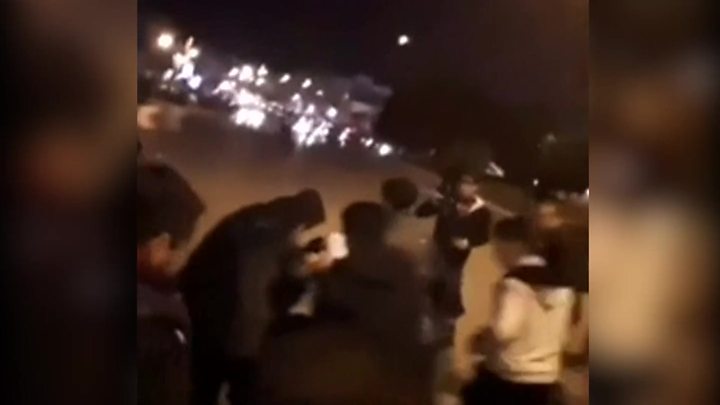 Ten people have been killed in anti-government protests sweeping Iran, according to state TV.

It did not specify where or when they happened. Six deaths were previously reported, including two people shot dead overnight in the town of Izeh.

The protests continued despite a call for calm from President Hassan Rouhani on Sunday.

In his first intervention, President Rouhani warned that violence would not be tolerated at the protests.

Mr Rouhani acknowledged grievances over Iran's economic situation, a lack of transparency and corruption, but defended his record.

The Iranian president said that citizens were "completely free to express their criticism of the government or stage protests… in a way that would lead to the improvement of the country's conditions" but warned against violent acts.

Nevertheless, protests continued. Police used tear gas and water cannon to quell a rally in Tehran's Engheleb Square, reported AFP news agency, and demonstrations were reported in Kermanshah and Khorramabad in the west, Shahinshahr in the north west and the northern city of Zanjan.

The demonstrations, which erupted on Thursday in Iran's second city of Mashhad, are the biggest show of dissent seen since the huge rallies of the Green Movement were brutally suppressed in 2009.

Until state TV reported 10 dead, six people were reported to have died:

How have authorities responded to protests?

In his remarks Mr Rouhani acknowledged popular grievances, though he warned that the government would show "no tolerance for those who damage public properties, violate public order and create unrest in the society".

Up to 400 people are reported to have been arrested in recent days, including 200 in Tehran on Saturday night.

And authorities continue to sporadically suspend social media websites they fear will be used to organise protests, including Telegram and Instagram.

State media have now begun broadcasting some footage on the protests, though it focused on young men attacking banks and vehicles or burning the Iranian flag, reported AFP news agency.

On Sunday police used water cannon to disperse protesters at a major intersection, as captured in a video obtained by BBC Persian.

What about Mr Rouhani's war of words with Donald Trump?

Mr Rouhani described the US president as an "enemy of the Iranian nation from the top of his head to his very toes" after Mr Trump said Iranians were "finally getting wise as to how their money and wealth is being stolen and squandered on terrorism".

And late on 31 December, Mr Trump tweeted more criticism of events in Iran.

Iran, the Number One State of Sponsored Terror with numerous violations of Human Rights occurring on an hourly basis, has now closed down the Internet so that peaceful demonstrators cannot communicate. Not good!