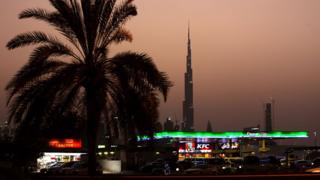 Value Added Tax (VAT) has been introduced in Saudi Arabia and the United Arab Emirates for the first time.

The 5% levy is being applied to the majority of goods and services.

Gulf states have long attracted foreign workers with the promise of tax-free living.

But governments want to increase revenue in the face of lower oil prices.

The tax kicked in on 1 January in both countries.

No plans for income tax

But some outgoings have been made exempt from the tax, or given a zero-tax rating, including medical treatment, financial services and public transport.

Organisations such as the International Monetary Fund have long called for Gulf countries to diversify their sources of income away from oil reserves.

In Saudi Arabia more than 90% of budget revenues come from the oil industry while in the UAE it is roughly 80%.

Both countries have already taken steps to boost government coffers.

In Saudi Arabia this included a tax on tobacco and soft drinks as well as a cut in some subsidies offered to locals. In the UAE road tolls have been hiked and a tourism tax introduced.

But there are no plans to introduce income tax, where most residents pay 0% tax on their earnings.

The other members of the Gulf Co-operation Council – Bahrain, Kuwait, Oman, and Qatar – have also committed to introduce VAT, though some have delayed plans until at least 2019.