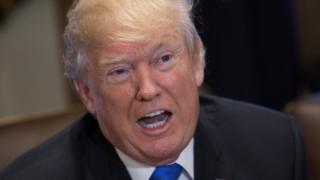 Trump attacks Pakistan 'deceit' in first tweet of the year

President Donald Trump has accused Pakistan of lying and deceiving the United States while receiving billions of dollars in foreign aid.

In his first tweet of the year, he also alleged Pakistan harboured terrorists.

Pakistan reacted angrily to the tweet, saying all the funding was accounted for and that Mr Trump was bitter due to the "US defeat in Afghanistan".

The US is considering withholding more than $250m (£185m) in aid that it delayed sending to Islamabad in August.

The move is being considered due to Pakistan's perceived failure to crack down more effectively on terror groups, The New York Times reports.

Pakistan's Foreign Minister Khawaja Asif told Pakistan's Geo TV: "We have already told the US that we will not do more, so Trump's 'no more' does not hold any importance,

"Pakistan is ready to publicly provide every detail of the US aid that it has received."‏

Pak as anti-terror ally has given free to US: land & air communication, military bases & intel cooperation that decimated Al-Qaeda over last 16yrs, but they have given us nothing but invective & mistrust. They overlook cross-border safe havens of terrorists who murder Pakistanis.

US Ambassador to Pakistan David Hale was summoned to the foreign office on Monday to hear a protest over Mr Trump's tweet.

Mr Trump has criticised Pakistan for offering a "safe haven" to terrorists in the past.

In a speech in August, he said: "We have been paying Pakistan billions and billions of dollars at the same time they are housing the very terrorists that we are fighting."

"It is time for Pakistan to demonstrate its commitment to civilisation, order, and to peace", he added.

US Secretary of State Rex Tillerson has also put pressure on Pakistan over its perceived backing for the Taliban in Afghanistan.

The US is a key ally to the country, which enjoys a special status as a non-Nato alliance partner.

But Mr Tillerson has said aid funding "could be on the table for discussion if in fact they are unwilling to change their posture or change their approach to how they are dealing with the numerous terrorist organisations that find safe haven in Pakistan".

Pakistan has already had millions of dollars of US aid withheld for allegedly not taking enough action against the Taliban-allied Haqqani network.

The New York Times said US officials had been denied access to a member of the organisation who they believed could help with information on an American hostage.

The Afghan Ambassador to the US Hamdullah Mohib and former Afghan President Hamid Karzai both welcomed Mr Trump's latest tweet.

Mr Karzai said the tweet "on Pakistan's duplicitous position over the past 15 years is vindication that the war on terror is not in bombing Afghan villages and homes but in the sanctuaries beyond Afghanistan".