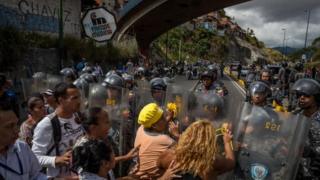 A Venezuelan soldier who shot dead a pregnant woman on Christmas Eve has been arrested.

Alexandra Conopoi, 18, was killed as she waited for subsidised pork that the government had promised to millions for the traditional Christmas dinner.

It happened as protests broke out when people realised there would not be enough meat for all.

Local media reported that the soldier opened fire when a group of protesters charged against his army unit in the capital, Caracas.

He has been identified as David José Rebolledo Cortez.

Roast leg of pork is a staple in Christmas celebrations in Venezuela.

People got angry when they realised they would not be able to have their traditional Christmas Eve meal.

Mr Maduro went on national television to accuse Portugal of leading a boycott against Venezuela in order to destabilise his government.

"What happened to the pork? They sabotaged us. I can name a country: Portugal," said Mr Maduro.

The Portuguese government dismissed the allegations.

Portugal's Foreign Minister Augusto Santos Silva said that private companies were in charge of exports in a market economy.

A Portuguese company that has sold pork to Venezuela in previous years, Raporal, said it did not know about a possible sabotage.

But it added that the government in Caracas still owed Portuguese companies 40m euros (£35.3m) from pork deliveries made in 2016.

On Friday, Colombian trucks began delivering 50 tonnes of frozen leg of pork to Venezuela in order to alleviate the crisis.

The Venezuelan opposition says Mr Maduro's populist policies and widespread corruption are to blame for hyperinflation and the chronic shortage of many goods, including toiletries and medicines.