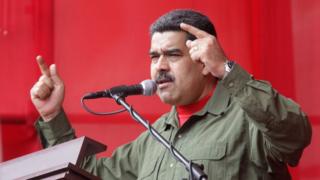 Venezuela is set to raise its minimum wage by 40%, in a move expected to worsen already high levels of inflation.

The country is suffering from an economic crisis in which shortages of food and medicine are common.

Venezuela's economy has been hit by falling oil revenue and the plummeting value of the Bolivar.

He said the move would "protect workers" from what he called an economic war on the socialist nation by the United States and others.

Earlier this year, the US imposed sanctions on President Maduro, labelling him "a dictator who disregards the will of the Venezuelan people".

The year has been marred by widespread protests and violence in Venezuela, culminating in the creation of a constituent assembly of Mr Maduro's supporters.

It was set up to rewrite the nation's constitution, but quickly assumed many powers of the opposition-led parliament.

Speaking on television next to a Venezuelan flag, Mr Maduro described the pay increase as "good news".

But there are fears the move will simply push inflation rates up faster. The opposition-led congress said that in the past year, prices had already risen by almost 1400%.

President Maduro, however, spent most of his speech blaming outside influences for Venezuela's problems, saying nations like the United States were attacking its currency and sabotaging its oil industry.

IcetruckJanuary 1, 2018
Like story:
tweet
Zac Efron Recounts Phone Call With Michael Jackson That Had Them Both in Tears
Costa Rica: 10 US tourists killed in plane crash