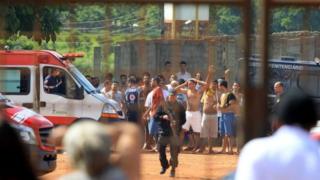 Police in Brazil say at least nine prisoners have been killed in a riot at a jail in the central state of Goias.

The authorities say the riot began when a group of armed inmates invaded a wing controlled by a rival gang. One of the victims was decapitated.

After a shootout, more than 100 members of both factions escaped. Police say they have managed to regain control.

Riots are common in Brazilian prisons, which are notoriously overcrowded and understaffed.

The riot began in the afternoon of New Year's Day at the rural penitentiary in the outskirts of the state capital, Goiania.

Rival criminal factions clashed, broke the barriers of the compound and escaped.

Some 30 inmates have been re-arrested. But nearly 80 prisoners remain at large. At least 14 prisoners were injured.

"It was a clash between prisoners and it is all under control now," said Lieutenant-Colonel Hrillner Braga Ananias.

Relatives have been outside the compound in Aparecida de Goiania since Monday afternoon.

"My brother is inside and I don't have any information about him," Luana Cristina told O Popular newspaper.

They were in charge of some 900 inmates, he said.

Brazil prison riots: What's the cause?

Brazil has one of the largest prison populations in the world.

The country's jails are largely controlled by powerful criminal factions with access to drugs, mobile phones and weapons.