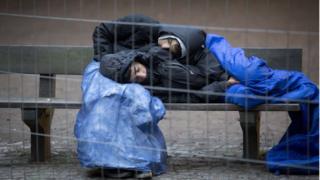 German doctors have spoken out against proposals for young asylum seekers to undergo mandatory medical tests to ascertain their age.

The German Medical Association (Bundesärztekammer) said the checks were ethically wrong and unreliable.

Conservative politicians have called for tests such as X-rays to make sure young migrants are not lying about being under 18 to avoid deportation.

It follows outrage over the killing of a girl, allegedly by an Afghan migrant.

The 15-year-old was stabbed with a kitchen knife outside a shop in Kandel, in south-western Germany, last week.

An Afghan refugee, who says he is the same age, is accused of attacking her after she broke off their relationship.

After the killing, the girl's father said of the suspect: "There's no way he is ever only 15… We hope that through the process we will now know his true age."

Chancellor Angela Merkel's Bavarian allies, the CSU, wants all young asylum seekers to undergo medical tests if their age is in doubt. Methods include doing an X-ray on the hand to assess bone development, or measuring teeth.

But Frank Ulrich Montgomery, president of the German Medical Association, said the tests had a large margin of error.

"The investigations are complex, expensive and burdened with great uncertainties," he told the Süddeutsche Zeitung.

"If you were to do this with every refugee it would be an interference in their human welfare."

German experts believe many young male migrants lie about being under 18 to get better access to housing and support.

Currently officials try to determine the age of new arrivals through verbal interviews, while medical tests are voluntary.

The CSU says it will push for the tests to become compulsory in coalition talks with the Social Democrats, who oppose such a move.

"I want everyone who comes into our country and claims to be a teenager to be medically checked for their age," said the CSU's Joachim Herrmann, Barvaria's interior minister.

"Young people cost the state more money in special care and have a lower criminal liability. The state can not basically leave it that way."

The killing of the teenage girl in Kandel is the latest case to spark calls for age testing in Germany.

An Iranian asylum seeker is already on trial for allegedly raping and killing a 19-year-old student in Freiburg in October last year. He initially claimed to be 16, but his own father told a court he was 33.