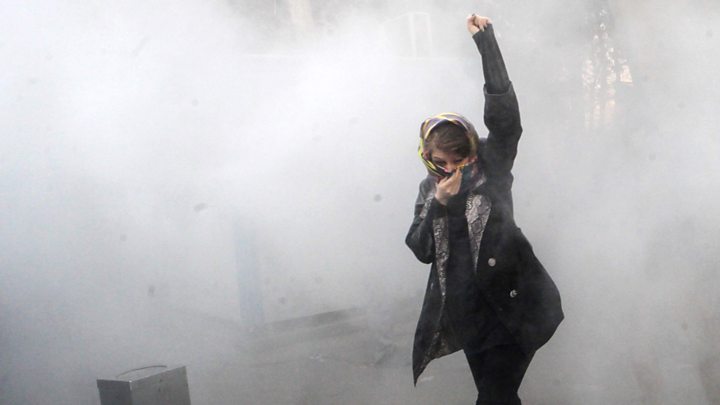 Iran's supreme leader has accused the country's enemies of stirring days of protests that have claimed at least 22 lives.

The protests are the largest since the disputed 2009 presidential election.

They began last Thursday in the city of Mashhad, initially against price rises and corruption, but have since spread amid wider anti-government sentiment.

What have Iran's leaders said?

In a post on his official website, Iran's supreme leader was quoted as saying: "In recent days, enemies of Iran used different tools including cash, weapons, politics and intelligence services to create troubles for the Islamic Republic."

The dignity, security, and progress of the Iranian nation is owed to the self-sacrifice of the martyrs. What prevents enemies from exerting their atrocities is the spirit of courage, sacrifice, and faith within the nation.

He said he would address the nation about the recent events "when the time was right".

Analysts say the supreme leader's reference to "enemies" is a swipe at Israel, the US and regional rival Saudi Arabia.

Tasnim news quoted Ali Shamkhani, secretary of the Supreme National Security Council, as warning Saudi Arabia that there would be a response from Iran "and they know how serious it can be".

Musa Ghazanfarabadi, the head of Tehran's Revolutionary Court, in turn warned that the ringleaders of the protests would face harsh punishment.

President Hassan Rouhani's words have been more measured. He has called the protests an "opportunity, not a threat", recognised economic discontent and said people had a right to take to the streets. However, he has also vowed to crack down on "lawbreakers".

Reformist and moderate MPs have released a statement urging the authorities to be open to criticism and to be tolerant of the right to protest which, they said, was enshrined in the constitution.

But they also accused the US of trying to take advantage of the situation.

The Islamic Propagation Co-ordination Council, which organises state rallies, has called on people to turn out on Wednesday for pro-government events in Kermanshah, Alborz, Isfahan and Hormozgan provinces.

There were reports on social media on Tuesday of more unrest, although it is not possible to confirm it independently or the exact timing.

The reports spoke of shots being fired in Sanandaj, in Kurdistan province; a video showed protesters and security forces on the streets of the city of Hamedan; a second video appeared to show flash bombs or grenades being thrown in Rasht and a third showed street fires in Karaj. Other unrest was reported in Gohardasht and Eslamabad-e-Gharb.

How has the outside world reacted?

US ambassador to the UN Nikki Haley said Iran's allegation that foreign enemies were behind the protests was "complete nonsense".

She said the US also planned to call an emergency session at the UN.

President Donald Trump has posted a string of tweets in support of the protesters and against Iran's leaders, the latest one on Tuesday.

The people of Iran are finally acting against the brutal and corrupt Iranian regime. All of the money that President Obama so foolishly gave them went into terrorism and into their “pockets.” The people have little food, big inflation and no human rights. The U.S. is watching!

Iran's foreign ministry spokesman, Bahram Ghasemi, responded by saying Mr Trump should focus on "the domestic issues of his own country, such as daily killings of dozens of people… and the existence of millions of homeless and hungry people".

When the protests started last Thursday, they were about the current economic crisis but as they spread, pent-up frustrations spilled out and politics became a big part of them.

President Rouhani has been widely criticised. He has disappointed voters who hoped he would do more to turn round an economy that has been damaged by years of sanctions, corruption and mismanagement.

Iran's role in conflicts across the Middle East has also been criticised as it is an expensive foreign policy at a time when people in Iran are getting poorer.

Leading figures in the Islamic Republic have also been targeted by protesters, including Supreme Leader Ayatollah Khamenei. He has responded by blaming foreigners. Iran has suffered in the past from foreign interference, so his words will strike a chord among some – and could also signal a much tougher response from the security forces.

The demonstrations do not seem to have recognisable leaders, unlike the last big protests after the disputed presidential election in 2009. At that time, the elite of the Islamic Republic was divided. It is not at the moment, so that will make it harder for the protests to be sustained, and they may run out of steam.

But the fact they are happening at all is very significant. They show how discontented Iranians are with increasing poverty, after years of repression.

Mass demonstrations – referred to as the Green Movement – were held by millions of opposition supporters against the disputed election victory of incumbent President Mahmoud Ahmadinejad.

At least 30 people were killed and thousands arrested in the wave of protests, which drew the largest crowds in Iran since the Islamic Revolution of 1979.