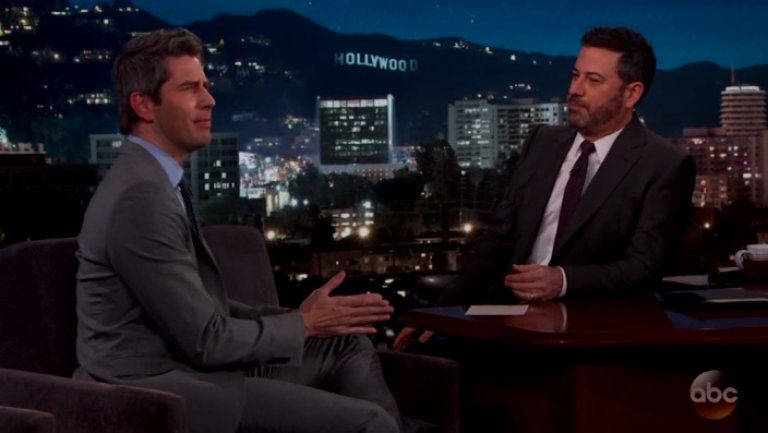 Jimmy Kimmel Predicts Who Will Win This Year's 'Bachelor'

The new star of the ABC dating program, Arie Luyendyk, Jr., dropped by the late night show to chat about the latest season.

The season 22 star, a professional race car driver-turned-realtor, was the runner-up on Emily Maynard's 2012 season of The Bachelorette. Now, at age 36, he finds himself the center of attention for current contestants vying for his heart.

As he has done in previous years, Kimmel made his predictions for who would take home the final rose this season in his "Rosetradamus" segment.

First, for Tia, Kimmel noted that she gifted Luyendyk with a "little wiener" when he met her and predicted Luyendyk "won’t pick her but you will keep her around for a while."

Next, Kimmel made predictions for Chelsea. "She’s clearly going to be the villain, so she needs to stay around for awhile," Kimmel said, causing Luyendyk to shuffle uncomfortably, eliciting a loud reaction from the crowd.

For Becca M., Kimmel noted, "She made the other girls cry in the promo which means she will be around for a while. I believe she’s in your final four." Luyendyk was mum on the prediction.

Finally, Kimmel revealed his prediction for this season's winner: Becca K. "Despite a weird start, making you get down on one knee…You seemed into her. You also gave her the first rose, which means she’s probably the only one whose name you remember," said Kimmel. Once again, Luyendyk wouldn't offer a clear confirmation of the late night host's predictions.

"Maybe you won’t pick any of them,” Kimmel quipped.