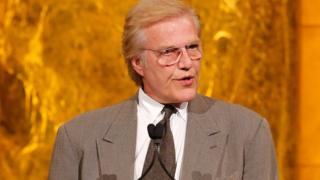 The longstanding leader of the New York City Ballet, Peter Martins, has retired amid accusations of sexual harassment and abusive behaviour by ballet members.

He denied the allegations in a letter to the board announcing his retirement, according to the Associated Press (AP).

Mr Martins, a Danish former ballet dancer, had been the ballet's master-in-chief since 1990.

The New York Times recently reported that City Ballet dancers had come forward to allege verbal and physical abuse dating back to 1993.

In a statement reported by AP, the ballet's board thanked Mr Martins for his work but said the investigation into misconduct would continue.

In his letter, Mr Martins said he was retiring as the allegations against him had been a "disruption" to the ballet.

Mr Martins said he had "co-operated fully" in the investigation, which he said would have "vindicated" him.

The City Ballet statement quotes chairman Charles Scharf as saying that "the board takes seriously the allegations that have been made against [Mr Martins] and we expect the independent investigation of those allegations to be completed soon."