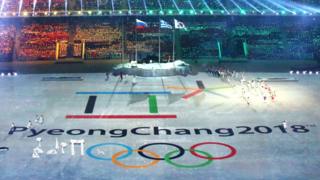 South Korea has offered high-level talks with North Korea next Tuesday to discuss its possible participation in the 2018 Winter Olympic Games.

The North's leader, Kim Jong-un, said earlier he was considering sending a team to Pyeongchang in South Korea for the Games in February.

He said the two sides should "urgently meet to discuss the possibility".

South Korea's president said he saw the offer as a "groundbreaking chance" to improve relations.

At a cabinet meeting on Tuesday, Moon Jae-in also said the North's nuclear programme would be the backdrop of any sporting discussions.

US President Donald Trump said sanctions "and other pressures" were beginning to have an impact on North Korea.

Referring to the possible North-South dialogue he tweeted: "Perhaps that is good news, perhaps not – we will see."

The village, in the heavily guarded demilitarised zone (DMZ) at the border, is where the Koreas have historically held talks.

It is not yet known who, if anyone, will attend the proposed talks as North Korea has yet to respond.

President Moon said he wanted his ministers to act fast to ensure the North's delegation attended.

If the two countries do meet, Hyung Eun Kim from the BBC's Korean service says, they are expected to talk logistics:

When did they last meet?

The last high-level talks, in December 2015 in the Kaesong joint industrial zone, ended without any agreement and the agenda was not made public.

In July 2017, South Korea proposed two bilateral meetings: one focusing on military talks and another that would reunite families separated by the war.

Neither happened and instead the North continued to test-fire missiles.

What has Kim Jong-un said this time?

North Korea's leader took many people by surprise when he said he was "open to dialogue" with his neighbours in his New Year's Day speech.

At the same time, he repeated threats against the US, saying a nuclear launch button was always on his table.

North Korea has in the past two years quickly advanced its nuclear and conventional weapons programmes, despite increasing international sanctions.

Analysis: The crisis is far from over

A step back from the brink of potential war, or an effort to open a rift in the already bumpy relationship between South Korea and the United States? Kim Jong-un's sudden willingness to talk could be both these things.

It raises intriguing possibilities in the wake of a year where the drift has been entirely negative:

South Korea's President Moon has responded positively, eager to bolster his own diplomatic hand. But given that the North sees its nuclear programme as a permanent fixture and President Donald Trump insists that Pyongyang will not be allowed to have a credible means of striking US territory, it is hard to see this crisis abating any time soon.

Although the North has missed the official deadline to confirm their participation, the skaters could still compete via an invitation from the International Olympic Committee.

North Korea has participated in the Olympics before, but not in South Korea. It boycotted the 1988 Olympic Games in Seoul.

Ahead of those games, Korean Air Flight 858 exploded over the Andaman Sea, killing more than 100 people. A North Korean spy later said Pyongyang had ordered her to plant it to create chaos in South Korea.

Where are this year's Winter Games?

Pyeongchang, approximately 180km (110 miles) east of Seoul, will host both the Winter Olympics in February and the Winter Paralympics in March.

In its international marketing, South Korea is spelling the city with an upper-case letter in the middle – PyeongChang – in a bid to differentiate it from the North Korean capital, Pyongyang.

In 2014, Daniel Olomae Ole Sapit, a member of the Maasai tribe in Kenya, bought a ticket to North Korea by mistake when trying to attend a UN conference in Pyeongchang.