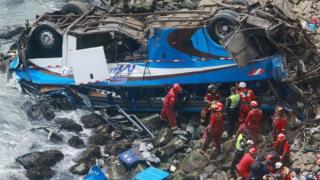 Peru Pasamayo: Many killed as coach plunges off cliff

At least 25 people have been killed after a coach plummeted 100m (330ft) down a cliff and landed upside down on a beach in Peru, officials say.

The accident happened on a notorious stretch of road known as Curva del Diablo (the devil's bend) in Pasamayo, north of the capital Lima.

A transport official said the coach was carrying about 50 passengers and the death toll could rise.

The Pacific Ocean road is considered one of the most dangerous in Peru.

Initial reports said more than 40 people had been killed but Peru transport chief Dino Escudero later said only 25 deaths could so far be confirmed.

Images from the scene showed rescuers surrounding the wrecked coach while people on the road above looked on.

Mr Escudero said an investigation had been launched but it appeared that the coach had been in collision with the trailer of another vehicle, causing the driver to lose control.

A helicopter was helping in the rescue operation.