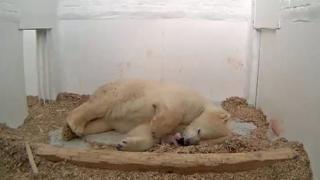 A baby polar bear cub has died in a Berlin zoo.

Officials at Berlin's Tierpark zoo said that the young polar bear, which was born in December, was found dead when the zoo re-opened on Tuesday.

The cub had appeared to be healthy when it was last seen with its mother on New Year's Eve and appeared to have died of natural causes, the zoo said.

The zoo in the German capital had been closed between New Year's Eve on Sunday and Tuesday.

Born to an eight-year-old polar bear called Tonja, the cub had not yet been named and was only 26 days old when it died.

The zoo said in a statement that staff found the cub's lifeless body on a surveillance camera when they checked the enclosure on Tuesday morning.

A cub born to the same mother died in March 2017 aged four months, from unknown causes.

Tierpark zoo said in a statement that a post-mortem examination would be carried out to determine the exact cause of death.