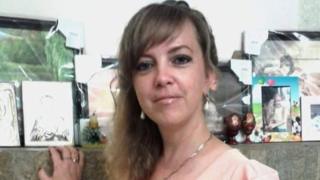 Ukrainian police have opened a murder investigation after the body of a lawyer and human rights activist was found in a river in the capital Kiev.

Iryna Nozdrovska, 38, went missing on 29 December. She had worked on the case of her sister, who was killed in 2015 by a car driven by the nephew of a Kiev judge.

The driver, Dmytro Rossoshansky, was jailed for seven years in May 2017.

Iryna Nozdrovska had allegedly received threats from him and his family.

The BBC has not seen confirmation of those threats.

Her body was found in Vyshhorod district, a northern suburb of Kiev. The police there had issued a missing persons notice (in Ukrainian) about her on 30 December on Facebook.

In a Facebook post (in Russian), Ukrainian MP Mustafa Nayyem said Rossoshansky's father had threatened Ms Nozdrovska during an appeal hearing on 27 December.

According to Mr Nayyem, the threat was: "You'll come to a sticky end."

Rossoshansky's lawyer failed to have his conviction quashed at Wednesday's hearing.

He was intoxicated with drugs or alcohol when his car hit Ms Nozdrovska's sister, 26-year-old Svitlana Sapatinskaya, in September 2015.

A civil society group called Tverdynya (Stronghold) appealed on Facebook for people to rally outside the police headquarters on Tuesday, calling for the "murderer or murderers" to be found and for Ms Nozdrovska's young daughter to be protected.