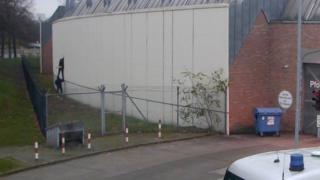 Berlin authorities are the target of ridicule and disbelief after nine prisoners escaped or absconded from one prison in the space of five days.

Six remain on the run from Plötzensee jail after four separate incidents.

Last Thursday, four inmates used an angle grinder and hammer from the prison workshop to break through a ventilation shaft. They then crept under the perimeter fence.

Despite CCTV capturing the escape, it was 41 minutes before it was noticed.

Two of the four prisoners – who were serving sentences for theft, aggravated assault and extortion – are reported to be still at large.

Berlin's Senator of Justice Dirk Behrendt has so far faced down calls for him to resign, saying he has assembled a commission of experts to eliminate vulnerabilities in the prison system.

In the other incidents:

"Plötzensee jail is like the Berghain [famed Berlin nightclub]. It is easier to get out than in," quipped one.

Another commentator joked that in light of their "speedy planning and implementation of a construction project", those who escaped last Thursday should immediately be put in charge of the building of the long-delayed Berlin Brandenburg Airport.

It's "open house" at Berlin's prisons, mocked one politician. "This jail is like a hostel, where you can come and go whenever you want," tweeted another.

Nine prison escapes in five days from the same prison is something of a record. So opposition politicians are calling for Berlin's Senator of Justice Dirk Behrendt to be sacked.

In his defence, technically speaking not all of the cases were breakouts: Some inmates were serving open-prison sentences with minimal supervision. But some of them even opted to climb out of the window, rather than simply not return from permitted appointments, leading to questions about the building's security.

And in the most spectacular case, CCTV cameras filmed prisoners hammering their way through a ventilation shaft – but the alarm was still raised too late.

While in opposition Mr Behrendt, who's from the Green Party, earned respect for fighting for better conditions in Berlin's prisons. When he was put in charge of jails last year promised a more human approach to prisoners. Now conservative opponents are accusing him of simply being too lenient instead.

Security measures in the prison, which permits inmates to leave the jail on day release in order to work, are less stringent than in other jails.

But opponents of Mr Behrendt lined up to call for his resignation nonetheless.

Florian Graf, who leads the centre-right Christian Democrats (CDU) in Berlin's state parliament, said he was a "dilettante", while Joschka Langenbrinck, a deputy for the Social Democrats (SPD) bloc said the affair was a "reason for a senator to resign".

Mr Behrendt's spokesperson pointed out there had been no overall increase in the number of breakouts under his tenure.