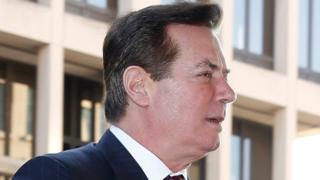 Mr Manafort was charged last October with conspiring to defraud the US in his dealings with Ukraine.

But Mr Manafort is alleging that the criminal case against him goes beyond Mr Mueller's authority.

He also names acting attorney general Rod Rosenstein and the justice department in the lawsuit filed in the US District Court in Washington on Wednesday.

The 12 charges brought against him last October – along with one of his business associates, Rick Gates – include conspiracy to launder money.

They do not relate to Mr Trump's campaign but to the alleged concealment of payments from the pair's Ukrainian business dealings up to 2016. Both men have denied any wrongdoing.

Mr Manafort's lawsuit accuses Mr Rosenstein of exceeding his legal authority to "grant Mr Mueller carte blanche to investigate and pursue criminal charges in connection with anything he stumbles across".

It asks the court to have the case against Mr Manafort dismissed.