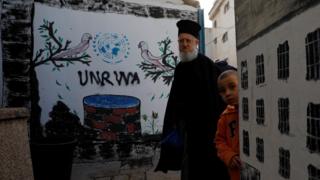 Palestinian officials have dismissed as "blackmail" Donald Trump's threat to cut US aid over what he called their unwillingness to negotiate with Israel.

A spokesman for President Mahmoud Abbas insisted Jerusalem was "not for sale" – a reference to Mr Trump's recognition of the city as the capital of Israel.

Mr Abbas was not against negotiations, he said, but they had to be based on "international laws and resolutions".

In addition, it is the largest single donor to the UN Relief and Works Agency for Palestine Refugees in the Near East (Unrwa), providing $368m in 2016.

What did Mr Trump say?

Mr Trump promised to pursue "the ultimate deal" when he took office last year, and asked his son-in-law Jared Kushner and former lawyer Justin Greenblatt to work on a plan to end the decades-old conflict between Israel and the Palestinians.

But on Tuesday night he acknowledged in a series of tweets that the attempt to revive the peace process had stalled.

It's not only Pakistan that we pay billions of dollars to for nothing, but also many other countries, and others. As an example, we pay the Palestinians HUNDRED OF MILLIONS OF DOLLARS a year and get no appreciation or respect. They don’t even want to negotiate a long overdue…

…peace treaty with Israel. We have taken Jerusalem, the toughest part of the negotiation, off the table, but Israel, for that, would have had to pay more. But with the Palestinians no longer willing to talk peace, why should we make any of these massive future payments to them?

Mr Trump gave no details, but earlier on Tuesday the US permanent representative to the UN, Nikki Haley, suggested he might halt funding for Unwra.

How did the Palestinians react?

A spokesman for Mr Abbas, the president of the Palestinian Authority, said on Wednesday: "Jerusalem is the eternal capital of the state of Palestine and it is not for sale for gold or billions."

Nabil Abu Rudeina told AFP news agency: "We are not against going back to negotiations, but [these should be] based on international laws and resolutions that have recognised an independent Palestinian state with East Jerusalem as its capital."

Hanan Ashrawi, a member of the Palestine Liberation Organisation's executive committee, said Palestinians would "not be blackmailed" and that Mr Trump had "sabotaged our search for peace, freedom and justice".

There was no response from Israeli Prime Minister Benjamin Netanyahu, but Culture Minister Miri Regev said: "You cannot on the one hand receive $300m in American aid per year and at the same time close the door on negotiations.

"We are dealing with a president who says what he thinks clearly and does not resort to diplomatic convolutions that mean nothing," she told Israel's Army Radio.

How does US aid currently reach the Palestinians?

In 2016, almost $370m went to Unrwa, an agency that provides assistance to some five million Palestinian refugees across the Middle East.

Of the $260m in bilateral aid the US provided, only a relatively small amount went directly to the Palestinian Authority. Much of it instead went towards projects administered by the US Agency for International Development (USAid).

US officials told the Associated Press that one option for Mr Trump was to send money that goes directly to the PA to the NGOs working with USAid. Similar proposals were envisioned for Unrwa, they added, noting that children in Gaza, Jordan and Lebanon would be disproportionally affected by a complete cut-off.

However, the officials said security assistance for the PA – which pays for training, advice, housing and non-lethal equipment to forces in the occupied West Bank who are loyal to President Abbas – was unlikely to be affected.

Israel receives more than $3bn in military aid per year from the US.

Why is the status of Jerusalem so contentious?

The president's decisions last month to recognise Jerusalem as Israel's capital and begin preparations to move the US embassy there from Tel Aviv were denounced by the Palestinians, who said it showed the US could not be a neutral mediator.

UN member states also voted decisively at the General Assembly in favour of a resolution effectively calling the US declaration "null and void" and demanding it be cancelled.

Israel regards Jerusalem as its "eternal and undivided" capital, while the Palestinians claim East Jerusalem – occupied by Israel in the 1967 Middle East war – as the capital of a future state.

Israeli sovereignty over Jerusalem has never been recognised internationally, and according to the 1993 Israel-Palestinian peace accords, the final status of Jerusalem is meant to be discussed in the latter stages of peace talks.