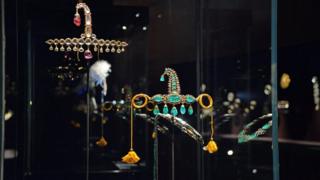 Jewellery belonging to the Qatari royal family's collection has been stolen from a Venice exhibition.

Several items of jewellery were stolen from a case at the exhibition at the Doge's Palace on Wednesday morning, police said.

The items are believed to be worth several million euros, police said, but they may be difficult to sell on the black market because of their fame.

Police have launched an investigation into the theft.

The exhibition, entitled Treasures of the Mughals and the Maharajahs, brought together hundreds of Indian gems from the 16th to 20th Centuries. It was due to close on Wednesday evening.

The jewellery belongs to the Al Thani collection, which is owned by the Qatari royal family.

Police in Venice said they believed the individual gems in the jewellery might be removed and sold separately.

"The glass case was opened up as it if were a tin can while the alarm, if it worked at all, went off late," Mr Gagliardi is quoted as saying by the Ansa news agency.

Italian police said they had sent photos of the stolen items to London, where the Qatari owners are, so that they can be identified and priced.