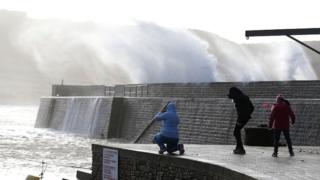 Winter storm Eleanor has swept into most of northern Europe, including France and Germany after battering the UK, cutting power to tens of thousands of homes and affecting transport.

Nine people were hurt in the wake of the storm in France, where gusts of more than 110km/h (70 mph) were recorded.

In the Netherlands, one person was injured as a tree fell.

Storm Eleanor is the fifth named storm of the season.

In northern France, the storm cut power to more than 200,000 households and Eleanor is set to move to other regions throughout the day, including Corsica, where gusts could reach 200km/h.

Air travel was also disrupted in the capital, Paris, and in the east of the country.

In Paris, the Eiffel Tower was closed because of the strong winds, with gusts of up to 100km/h expected. The city's parks have also been closed until the storm dies down because of worries over falling tree branches

In Germany, the storm – named Burglind there – has swept over much of the country. It packed gusts of more than 120km/h in the west of the country and led to transport disruption, reports say.

Switzerland – where it was reported that about 14,000 homes were without power – and Austria, where the avalanche risk was expected to be raised to four on a scale of five in several areas, have also been affected.

Belgium was put on "orange" alert, the third of four warning levels, with officials urging people to be cautious when going out because of tree branches and other flying objects.

In the Netherlands, more than 200 flights were cancelled at Amsterdam's Schiphol airport. Several main roads and train lines were also closed.

In the UK thousands of homes are without power and travel has been disrupted after Storm Eleanor hit there.

The Met Office recorded gusts reaching 100mph (161km/h) overnight with a weather yellow warning still in place for Wales, England, most of Northern Ireland and parts of southern Scotland.

In the Republic of Ireland, 97mph gusts were recorded, and there was flooding, travel disruption and damage to buildings.