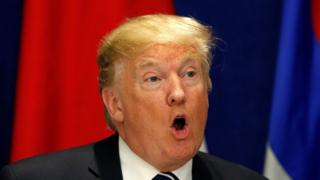 Trump to Kim: My nuclear button is 'bigger and more powerful'

US President Donald Trump has boasted that his nuclear button is "much bigger" and "more powerful" than North Korean leader Kim Jong-un's.

Mr Trump's tweet is the latest contribution to an increasingly personalised feud between the nuclear-armed leaders.

Mr Kim threatened earlier this week that his nuclear launch button was "always on my table".

It ended a quick-fire day of tweeting by Mr Trump in which he took credit for a lack of plane crashes, announced awards for "corrupt media" and threatened to pull aid from Palestinians for failing to show "appreciation or respect".

Is the 'playground chatter' in new territory?

Just as President Trump's unorthodox Twitter habits have puzzled observers in the past, the latest tweet is again redefining what is considered a diplomatic or presidential tone.

"I guess the president regards this as a show of strength," said Jim Himes, a Democrat representative from Connecticut and a member of the House Intelligence Committee, on CNN. "But, as everybody who's ever been in a… first grade playground recognises, it's usually the person who's most aggressively pounding their chest that is in fact the weak one on the playground."

Mr Trump and Mr Kim have a colourful history of name-calling.

Eliot A Cohen, who advised the Republican former Secretary of State Condoleezza Rice, said the latest tweet was childish yet deadly serious.

Spoken like a petulant ten year old. But one with nuclear weapons – for real – at his disposal. How responsible people around him, or supporting him, can dismiss this or laugh it off is beyond me. https://t.co/uKu6p1KUWp

I had to just reassure my teen-age daughter not to panic about nuclear war with North Korea because she read Trump’s tweet. I’m so filled with rage at Donald Trump.

Several argued that Twitter should not allow "calls for nuclear war" to be broadcast on its platform.

Hey @TwitterSupport, is it against your terms of service to provoke nuclear war with North Korea here? Don't you guys have a button that's even bigger than Donald Trump's that you can use to shut this down? pic.twitter.com/7RjVd00Jnw

However, Mr Trump's supporters have defended him, saying his comments were both factually accurate and showed American strength and resolve.

Press OUR Big Button Trump!!!❤️ Its about time you show North Korea who the USA ?? is!!!

For those critical of @realDonaldTrump, where was your criticism when the previous administration remained silent while Kim Jong Un developed nuclear weapons?? Some times, the lion has to roar and remind everyone that he is king. #MAGA

Could Donald Trump press the button?

Mr Trump's latest comment states the obvious: a US president has immediate access to the nuclear codes.

However, the real process of launching a nuclear attack does not involve any button-pressing.

After high-level consultations, the president would exchange codes with top military officials. They are printed on a card known as "the biscuit", which he carries wherever he goes.

According to US media, Mr Trump's desk does, however, have a button that orders someone to bring him a Diet Coke.

The button we know about on the President's Desk summons a valet with a Diet Coke, but doesn't launch a nuclear missile. pic.twitter.com/DuAdC0knmY

At least that's what US media reported after seeing said button in action during interviews.

Could North Korea launch attack of its own?

Meanwhile, in contrast to the bickering on Twitter, the North has just reopened a telephone hotline to the South.

Was President Trump riled by a Fox News report?

The latest outburst came a day after Mr Kim's speech, to which President Trump initially reacted with caution. "Perhaps that is good news, perhaps not – we will see!", he tweeted.

But his later remark left some social media users questioning if the president had been watching Fox News – which had covered the topic a few minutes before. He is known to be a fan of the channel and often tweets along.

YouTuber 'ashamed' by his dead-man video

IcetruckJanuary 3, 2018
Like story:
tweet
Meryl Streep opens up about her own sexual harassment experiences
New York to install 1,500 security barriers after vehicle attacks