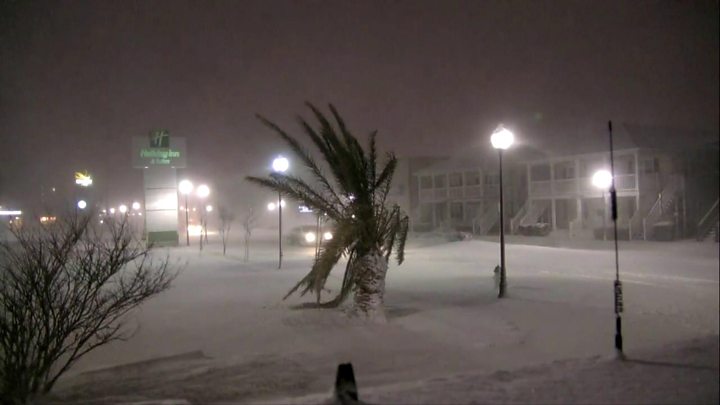 'Bomb cyclone' brings travel chaos and deaths to US north-east

A winter storm has caused travel chaos in the north-east US and is being blamed for up to 17 deaths.

Nearly 4,000 US flights were cancelled on Thursday as snow blanketed parts of the north-eastern US seaboard as well as eastern Canada.

Boston could get up to 18in (45cm) of snow while rough waters have already triggered coastal floods in the region.

The storm, known as a "bomb cyclone", is expected to continue to affect eastern North America into the weekend.

After the snowfall ends, temperatures are expected to plunge as frigid air lingering over the North Pole heads towards the US mid-Atlantic region.

Experts warn that parts of the US may record their lowest-ever temperatures on Friday and Saturday.

Nearly 60 million people are in the path of the storm, with weather warnings in effect from the Maine to parts of Georgia in the US.

The National Weather Service said: "Heavy snowfall rates will spread northward across NH and through southern/central ME through early this evening.

"In addition to heavy snowfall rates, the intensifying storm will result in strengthening winds, producing blizzard conditions for coastal regions of New England."

In Boston, weather officials say the tide may reach its highest-recorded level since 1921.

We do not recommend going out and floating on icebergs; this is a very dangerous situation along the coastline with major flooding ongoing, peoples homes & other infrastructure becoming inundated and damaged; please observe should you have to from a safe location https://t.co/2rhMUEQJy6

Coastal flooding has already begun in some areas of the state, and weather forecasters warn that it may takes days for water to drain back into the ocean.

The National Weather Service has warned Massachusetts residents to not stand on icebergs as they float down city streets.

Hurricane force winds of up to 60mph (95km/h) are predicted to hammer the north-eastern US coastline.

US railway operator Amtrak is running on a reduced schedule, and interstate buses are also being cancelled.

The weather pattern has already brought snow to the US South as far down as Florida.

"The situation has continued to deteriorate," said New York Governor Andrew Cuomo as he declared a state of emergency on Thursday.

"It's almost impossible to clear roads when you have those high wind gusts, because as soon as you clear the road the snow, the wind literally just brings the snow back on to the road."

Cars becoming stranded on the Long Island Expressway, he added, could cause a "situation of life and death" in which rescuers may be unable to reach trapped motorists.

Seventeen cold-related deaths have been reported across the US, according to the Associated Press news agency.

Three people were reported dead in Texas due to the cold temperatures.

Two people were killed in North Carolina when their pickup truck ran off a snowy road and overturned in a creek in Moore County, which had not expected snowfall, according to Governor Roy Cooper. An additional traffic-related death was also reported in Beaufort.

The storm is forecast to undergo rapid cyclogenesis over the Atlantic Ocean throughout Thursday and into the weekend, and current projections show areas north of New York as having the highest risk of significant impacts from strong winds and heavy snow.

Four Thresher sharks, which conservationists say are particularly vulnerable to the cold, have been found frozen to death along the Cape Cod Bay shoreline in Massachusetts.

Schools are closed in New York City, Philadelphia, Boston, the Carolinas, Maryland, and Virginia due to the danger of hypothermia, frostbite and traffic accidents.

Photos went viral online of students attending a lesson at a public school with a broken furnace in the Maryland city of Baltimore.

The entire Baltimore City public school system closed down after the local teachers' union complained of its educators being "forced to endure teaching in classrooms with dangerously low temperatures, instructing students who have been forced to try to learn bundled up in coats, hats and gloves".