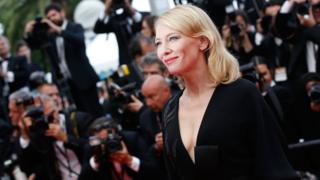 Oscar-winning actress Cate Blanchett is to chair the jury that will pick the award winners at this year's Cannes Film Festival.

She is "a rare and unique artist with talent and conviction", the Cannes Film Festival organisers said.

The Australian star is one of the Hollywood figures who recently launched the Time's Up campaign to tackle sexual harassment in the workplace.

Blanchett said she was "humbled" to be given the role for the festival in May.

She will lead a panel, usually made up of actors and film-makers, who will choose the winner of the Palme d'Or – the influential Cannes award for best film.

They will also select the festival's other main prizes.

Blanchett has won two Oscars – for The Aviator and Blue Jasmine – and been nominated five more times.

Cannes president Pierre Lescure and delegate general Thierry Fremaux said: "Our conversations this autumn convince us she will be a committed president, and a passionate and generous spectator."

She's the third female jury president in the last 10 years – the others being director Jane Campion in 2014 and actress Isabelle Huppert in 2009.

Blanchett said: "I have been to Cannes in many guises over the years – as an actress, producer, in the marketplace, the Gala-sphere and in competition but never solely for the sheer pleasure of watching the cornucopia of films this great festival harbours.

"I am humbled by the privilege and responsibility of presiding over this year's jury.

"This festival plays a pivotal role in bringing the world together to celebrate story: that strange and vital endeavour that all peoples share, understand and crave."

Last year's president was Spanish film-maker Pedro Almodovar and the jury also included actor Will Smith. The festival saw the pair disagreeing over where Netflix fits into the film world.

The 2017 jury chose art world satire The Square as the winner of the Palme d'Or.