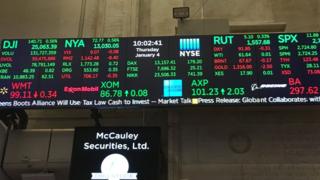 The gains extended an eye-popping run for Wall Street, which has surged over the last 12 months amid growth in the US and global economies.

On Thursday, markets got another boost after the ADP National Employment report estimated that employers added 250,000 jobs in December.

The US is due to release official job figures on Friday.

The Dow Jones already climbed about 25% last year, adding nearly 5,000 points and crossing the 24,000-mark at the end of November.

Greg McBride, chief financial analyst for Bankrate.com, said the gains were "no surprise".

"With the positive fundamentals – an expanding economy, continued job growth, still low interest rates and tax reform that promises to boost corporate earnings – it's no surprise to see the market continuing to climb."

The S&P and Nasdaq have also hit milestones in recent days.

Analysts have predicted additional stock market gains in 2018, but expect them to be more limited than last year.

In 2017, prices were lifted by a rebound in economic growth and optimism that new corporate tax cuts would translate into bigger dividends and share buybacks.

On Thursday, financial companies were among the winners, while real estate stocks fell.

In the past, the Dow passing a milestone like 25,000 points would elicit many cheers from traders on the floor of the New York Stock Exchange. And of course, many, many baseball caps.

But that wasn't the case on Thursday. There was cheering but you'd be hard pressed to find someone wearing a hat or showing that kind of exuberance.

And that's because these milestones have stopped being news, given just how quickly we are crossing them. It was only in January 2017 the Dow crossed the 20,000 mark. In 2016, the only record the Dow broke was when it crossed 19,000 points in November.

What this milestone really shows is that the absolute tear that markets were on in 2017 is continuing in to 2018.