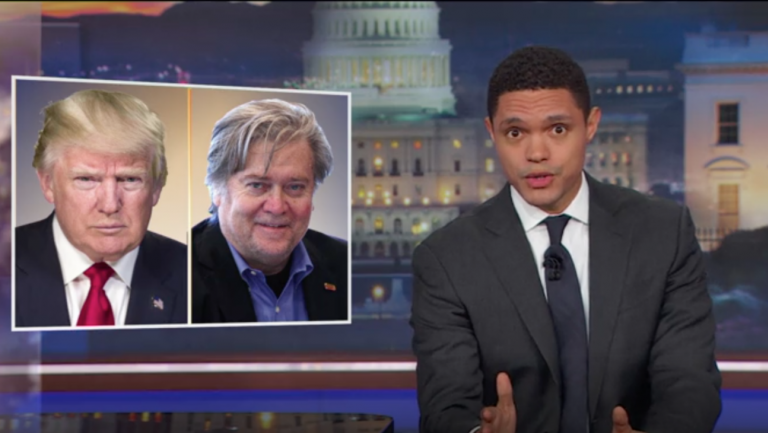 Hosts across the dial poked fun at Bannon's fiery statements in a new book excerpt, and Trump's retorts back.

The very public row between Steve Bannon and Donald Trump became choice fodder for late-night hosts on Wednesday, who poked fun at Bannon's quotes in a new book excerpt and the official statement from Trump that followed.

On Wednesday The Guardian released an excerpt from Michael Wolff's upcoming Fire and Fury: Inside the Trump White House that quoted Bannon, the former White House chief strategist, saying that a 2016 meeting between Donald Trump Jr. and a group of Russians during the 2016 presidential campaign was "treasonous" and "unpatriotic." (THR posted an exclusive excerpt on Thursday.)

Following the excerpt's publication, Trump sent a statement out via press secretary Sarah Huckabee Sanders on Wednesday that downplayed Bannon's role and influence inside the White House and alleged that Bannon had never represented Trump's "base," but only "himself" when he worked for Trump's campaign and White House.

On The Daily Show With Trevor Noah, host Trevor Noah highlighted choice zingers in the Trump statement, which he called "pure fire."

Commenting on a line in which Trump said that the only thing Bannon "does well" is leaking White House information to make himself look important, Noah countered, "I know you're mad, President Trump, but that's not true. Steve Bannon does a lot of things well. He can grow stubble while shaving, he can projectile vomit on command and he can somehow look like your grandfather and your grandmother at the same time. That's a skill."

Noah also tackled Trump's statement that now that Bannon is "on his own," he's realizing that "winning isn't as easy as I make it look."

"Donald Trump is so amazing, man," Noah joked. "In the middle of completely ripping his former chief strategist, he takes a moment to remind us of how dope he is. It's like someone bitch-slapping you and dabbing in the same motion," he said, before mimicking what that would look like.

On Jimmy Kimmel Live!, Kimmel rattled off many of the book's most shocking claims, beginning by saying, "This book paints a very unflattering picture of a detached and flat-out stupid president who eats at McDonald's because he's afraid of being poisoned."

Ha also joked that Bannon's alleged slam of Donald Trump Jr.'s meeting was belated. "He is quoted in a new book — accusing Jared Kushner, Trump’s son in law, of money laundering, accusing Donald Trump Jr. of treason. Which … now you tell us? Thanks a lot," Kimmel said.

Kimmel concluded: "This administration, unlike anything ever. There are three new scandals every day. The wheels just keep coming off, and somehow — the bus keeps rolling right along! I don’t know how many wheels there are on this bus."

Over on The Late Show, Stephen Colbert was quick to take a jab at Bannon's reveal that Trump did not want to be president. “He didn’t want him to win. There’s a name for that: the majority of American voters,” Colbert joked. Colbert also shared that he found a similarity with Melania Trump, who Bannon reported “cried on election night.” “That is the first thing we have in common,” Colbert said.

The late-night host also explained that he did not find the book revealing, but rather further confirmation of what was already known. “All of this proves once again, when it comes to Mr. Trump, everything is exactly what you thought it was. His entire schtick is just trying to convince you you’re crazy for seeing what’s obvious which makes sense. That’s basically how you sell luxury real estate."

In his book, Bannon also revealed that he does not think Donald Trump Jr. will be able to handle the pressure of testifying before Congress, writing, “They’re going to crack him like an egg on national TV.” To further defend Bannon’s claim, Colbert jokingly shared a CNN promo that shows an egg frying in a pan, saying “That’s Don Jr. Any questions?” “Yeah, I have a question. How soon can that happen?” Colbert quipped.

Arguing against Bannon’s statements, Trump referred to the former campaign CEO as a “staffer” and had “very little to do” with their “historic victory.” “I do agree with Trump there,” Colbert said. “That victory was the selfless, uncredited work of one eager young staffer.” Colbert then showed a mock-photograph of Vladimir Putin donning Trump’s campaign gear.

Late-night host Jordan Klepper, meanwhile, joked that the Trump-Bannon feud had the air of a divorce.

Klepper continued, playing the role of a child caught in a divorce: "Is it something I did? Was it because of that time I spent a night on 4chan when I supposed to go to bed? … I don't want to split my time, wear my MAGA hat on weekdays and my two collared shirts every other weekend."

Lexy Perez contributed to this report.