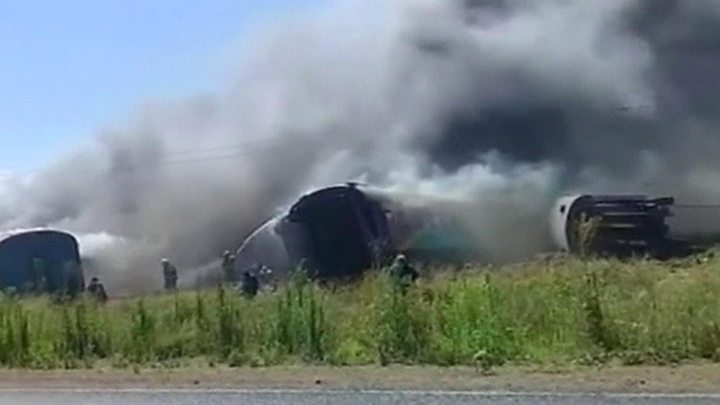 A passenger train has caught fire in South Africa after colliding with a truck, killing at least 18 people and injuring 268, rescue workers say.

Video footage showed a fire blazing through at least one carriage, near a crushed car and an overturned truck.

Around 700 people were on the train when it was hit by a truck, a BBC correspondent has reported.

'They didn't make it'

The driver of the truck tried to flee, but was arrested by police, passenger Seipati Moletsane told the privately owned eCNA news site.

Passengers in the first two coaches were wounded, she added.

"I was so traumatised. I didn't know what to do. I was looking for a door just to jump out. Every door was locked… All of a sudden, we just saw smoke, smoke, smoke," Ms Moletsane said.

A tweeter posted a video of the fire.

The emergency services rushed to the scene and battled the blaze on the train, which had been travelling from the coastal city of Port Elizabeth to the commercial capital, Johannesburg.

Officials fear the number of dead could rise, reports the BBC's Lebo Diseko from Johannesburg.

Mthuthuzeli Swartz told the BBC that emergency teams were trying to lift the train to see if there was anyone else trapped underneath the wreckage.

Passenger Tiaan Esterhuizen told the BBC that he and his family managed to get off the train, and he then tried to help three women trapped in the mangled wreckage.

"They were shouting to us: 'Listen, the baby, the baby!' We tried to look for the baby but we couldn't find it.

"We broke down the windows to look [for] it. And then… that same truck that they were in… was full of flames. So, they didn't make it."

The flames became intense, forcing him and others to retreat, he said.

"We used some fire extinguishers the police had‚ but it didn't work‚" Mr Esterhuizen was quoted in local media as saying.