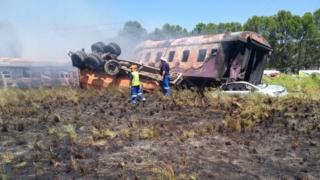 A passenger train has caught fire in South Africa after colliding with a truck, killing four people and injuring 40, rescue workers have said.

Video footage showed a fire blazing through at least one carriage, near an overturned truck and car.