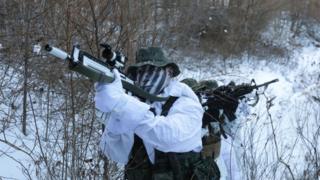 South Korea says US President Donald Trump has agreed to suspend their joint military drills during the Olympics.

The war simulations were set to clash with the Winter Games, which take place in the South Korean town of Pyeongchang in February.

The decision came in response to a request from Seoul.

It was feared the training sessions would anger North Korea, which re-opened communications with the South this week.

In a phone call with his South Korean counterpart Moon Jae-in, Mr Trump said he would send a high-level delegation, including members of his family, to the Games.

He also said he hoped for a good result in any talks between North and South Korea.

Pyongyang has not yet committed to formal talks, but President Moon has offered 9 January as a possible date.

Earlier on Thursday, Mr Trump claimed, on Twitter, that the renewed contact between the countries was down to his hard-line tactics.

With all of the failed “experts” weighing in, does anybody really believe that talks and dialogue would be going on between North and South Korea right now if I wasn’t firm, strong and willing to commit our total “might” against the North. Fools, but talks are a good thing!

Since coming to power, the US president has regularly traded insults with North Korean leader Kim Jong-un.

He has also encouraged other leaders to isolate the country.

On Wednesday, a hotline between the North and South was reopened, almost two years after it was disabled on Mr Kim's orders.

A brief call was made while tests were carried out.

North Korea has said it wants to discuss sending a delegation to the Pyeongchang Games.

Mr Kim took many people by surprise in his New Year's Day speech when he suddenly expressed an interest.

He spoke of melting "frozen North-South relations" and said attending the Games would be "a good opportunity to show unity of the people" in North Korea.