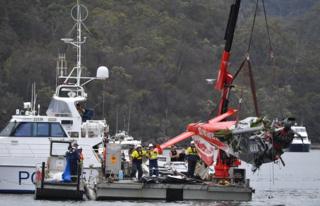 Australian authorities have recovered most of a seaplane that crashed near Sydney and killed six people.

On Sunday, high-profile UK business leader Richard Cousins, four members of his family and a Canadian pilot died when the plane plunged into a river.

After days of planning, police used divers and a crane to lift the wreckage in sections from a depth of 13m (40ft).

Officials said a crash involving the same plane in 1996 would form part of their wide-ranging investigation.

On Thursday, the majority of the De Havilland DHC-2 Beaver – including its fuselage, floats and a wing – was retrieved from the River Hawkesbury about 50km (30 miles) north of Sydney.

The family, from Tooting, in south-west London, were flying back to Sydney from an exclusive waterfront restaurant in Jerusalem Bay, not far from the crash site.

The businessman's brothers, Simon and Andrew Cousins, said on Thursday: "We are fortunate and thankful for the outpouring of love and support we've received from across the world."

"We are deeply touched by the tributes to Richard, William, Edward, Emma and Heather in the media and throughout the community."

The recovery effort, which began at 06:00 local time (19:00 GMT Wednesday), continued late into the day.

Police described it as a complex operation, with divers attaching slings to the wreckage amid "zero visibility".

According to a report in the Sydney Morning Herald, the same plane was involved in an accident that killed a pilot 22 years ago.

Its wingtip had struck a hill amid gusty conditions "conducive to windshear and turbulence" in rural New South Wales, according to an Australian Transport Safety Bureau (ATSB) report.

Investigators said the aircraft was climbing at almost maximum weight when it clipped the ground, sending it into a cartwheel.

The plane was then repaired and cleared to fly again under official safety requirements, the Civil Aviation and Safety Authority told the BBC.

It had since flown thousands of trips as a sightseeing plane until the crash on New Year's Eve.

ATSB executive director Nat Nagy said a "number of factors" were involved in the 1996 crash but it would be examined as part of a thorough investigation into the plane's history.

Seaplanes Pilots Association vice-president Kevin Bowe told the Sydney Morning Herald that crashed planes were rebuilt to a condition that was "often better than new".

How long will the current investigation take?

ATSB investigators have said they will release a preliminary report in about 30 days.

"The full sequence of events leading up to the accident is not fully understood at this stage," Mr Nagy said on Tuesday.

Investigators, he added, would rigorously examine the wreckage, gather witness accounts and examine the pilot's flying history, in an effort to learn what happened.