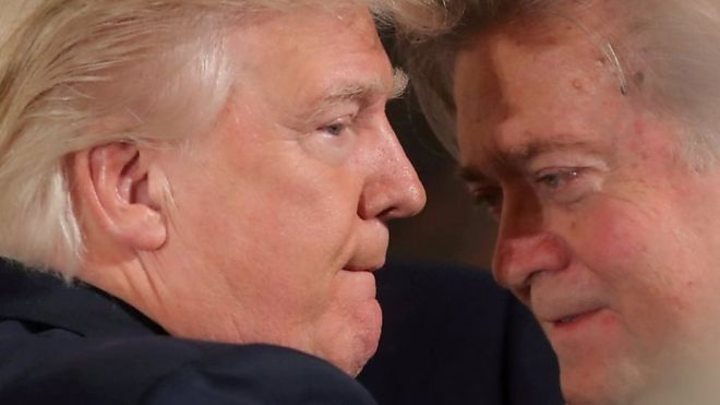 US President Donald Trump's lawyers have written to his former strategist Steve Bannon, saying he has violated a non-disclosure agreement.

The cease-and-desist notice accuses Mr Bannon of defaming the president in speaking to author Michael Wolff.

Wolff's forthcoming tell-all book describes the president as being unprepared for the job.

On his radio show on Wednesday, Mr Bannon called the president "a great man".

"You know, I support him day in and day out," he said on the station run by right-wing Breitbart News, which he heads, speaking after Mr Trump criticised him.

The book – Fire and Fury: Inside the Trump White House – makes many explosive claims, including that:

The Times says Mr Blair was hoping to get a job advising Mr Trump on the Middle East. A spokeswoman for Mr Blair told The Times that the allegations were a "total fabrication" and said Mr Blair had not suggested himself as Mr Trump's Middle East envoy.

Who is Michael Wolff?

The 64-year-old writer is a former columnist for New York magazine and Vanity Fair. He also wrote a biography of media mogul Rupert Murdoch.

His book is reportedly based on more than 200 interviews.

According to New York magazine, which first published the extracts, Wolff was able to take advantage of the Trump administration's political inexperience to gain an unusual amount of insight.

"There were no ground rules placed on his access, and he was required to make no promises about how he would report on what he witnessed," it says.

Wolff said he was able to take up "something like a semi-permanent seat on a couch in the West Wing" following the president's inauguration.

However, some of the US media are questioning the veracity of some of the stories. The Washington Post said he was a "provocateur and media polemicist", and his reporting had been questioned before.

Press secretary Sarah Sanders dismissed the book as a "trashy tabloid fiction" "filled with false and misleading accounts from individuals who have no access or influence with the White House".

What has Bannon said?

Aside from the radio comment, Mr Bannon has not spoken publically about the book, the president's comments or the legal action.

However, in an interview with BBC Newsnight, Raheem Kassam – a close adviser to Steve Bannon and UK editor of Breitbart News – said the Wolff interviews could have been taken out of context.

He also said Mr Bannon was well-placed to comment on the Russia controversy, having served in the US Navy.

"He understands what the geopolitical threat is…" said Mr Kassam. "So when he remarks that these people shouldn't probably have been in Trump Tower taking meetings with senior campaign staff without lawyers in the room, I would say that is a fair thing to say."

Donald Trump swept to the presidency in part on the back of Steve Bannon and his Breitbart conservative media empire. Now we will see how he fares when he is at war with them.