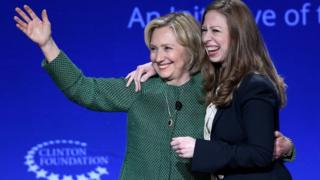 The US Justice Department has opened a new inquiry into the Clinton family's non-profit organisation, the Clinton Foundation, US media report.

Mrs Clinton's spokesman on Friday labelled the inquiry a "sham".

What will inquiry focus on?

The FBI has been quietly investigating the Clinton Foundation for months, according to people familiar with the inquiry, US media report.

The investigation is reportedly being led by FBI agents from Little Rock, Arkansas, where the foundation was founded.

They have interviewed at least one witness in the last month, reports the Hill, a Washington DC political news outlet.

Agents are said to be looking into whether policy favours were traded for unspecified donations to the foundation while Mrs Clinton was secretary of state.

But figures within the Justice Department and FBI doubt any charges will be brought, the Washington Post reports.

The FBI began looking into the foundation in 2015, but the inquiry was put on hold amid election season a year later.

Why is the foundation controversial?

US media outlets including the New York Times in recent years have scrutinised the Clinton Foundation.

Reports have explored possible links between contributions and speech fees received by the charity and decisions by Clinton's State Department that benefited donors.

Many of the allegations were detailed in conservative author Peter Schweizer's 2015 book Clinton Cash.

Founded in 1997 by former US President Bill Clinton, the Clinton Foundation has become a multi-billion dollar organisation.

It has projects around the world focusing on women's heath, climate change and economic development, according to its website.

Mrs Clinton pledged to have no formal role in the charity while serving as secretary of state from 2009-13.

In November last year the US Justice Department asked prosecutors to look into the charitable foundation and a deal to sell a uranium company.

But Mr Sessions at the time told a Senate hearing there was no basis to appoint a special counsel to investigate the "Uranium One" sale.

"The goal is to distract from the indictments, guilty pleas, and accusations of treason from Trump's own people at the expense of our justice system's integrity," he said.

"It's disgraceful, and should be concerning to all Americans."

A spokesperson for the Clinton Foundation itself said the investigation would not distract its humanitarian work.

"Time after time, the Clinton Foundation has been subjected to politically motivated allegations, and time after time these allegations have been proven false," said spokesman Craig Minassian.

However, the inquiry will be welcomed by President Trump, who has frequently called for investigations against the former secretary of state, whom he calls "crooked Hillary".

What other Clinton-linked inquiries are afoot?

On Friday, two top Republicans referred the former British spy who wrote a dossier of allegations about Donald Trump for possible criminal charges.

Mr Steele's political-opposition research report – reportedly bankrolled partly by the Clinton campaign – suggested the Trump campaign was complicit in Russian political meddling in the US.

Separately, there are reports that the Justice Department is looking back into Mrs Clinton's use of a private email server while she was America's top diplomat.

IcetruckJanuary 5, 2018
Like story:
tweet
Ann Curry: The Media Won’t Change Unless the Glass Ceiling is Broken
Storm gone, but cold will stick around through weekend