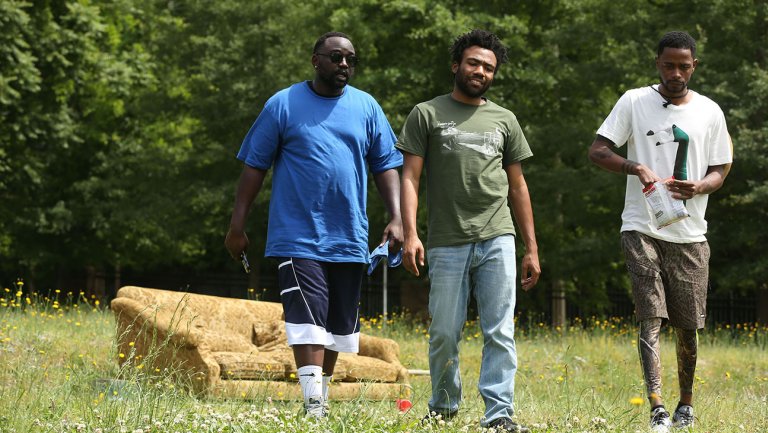 The creator of the Emmy-winning series also reveals why the second season is titled 'Robbin' Season.'

The cast and creators of Atlanta are dropping hints about the highly-anticipated second season.

For starters, season 2 has been given the title 'Robbin Season.' So when the mastermind of the Emmy-winning series, Donald Glover, and some of the show's actors and producers were on hand to field questions about the upcoming episodes at the Television Critics Association press tour on Friday in Pasadena, Calif., naturally queries about the new name arose. Stephen Glover, Donald's brother and a writer on the show, shed some light on the new title.

Turns out it's a time in Atlanta that takes place right before Christmas and New Years were there's an uptick in crime in the city. "People have to get Christmas gifts so it’s a time where robbery will go. You might get your package stolen from the front porch," he explained, adding that his neighbor got her car stolen out of the driveway when they were shooting the second season. "It’s just a very tense and desperate time."

The writers chose to make that the backdrop to the new season as it fit well with the characters' journeys. "Our characters are going through insane, desperate transitions so Robbin' Season is kind of a metaphor for all of our characters," he said. The new season which will premiere on March 1, will continue to follow young manager Earn Marks (Donald Glover) as he tries to get his cousin Alfred Miles' (Brian Tyree Henry) rap career off the ground.

Another big influence on the second season of Atlanta? Tiny Toons Adventures, the animated comedy from the early '90s about young cartoon characters. "We just went into this like, ‘Why are we going to do season 2? Everybody does season 2!’ And in the writers room, we talked a lot about How I Spent My Summer Vacation by Tiny Toons — which was a show we all really liked — and that was kind of the inspiration for season 2," said Donald, who added it was the writers' "favorite as kids."

Stephen went on to explain that the episodes of Summer Vacation were broken up into several episodes, between 8 and 9, and that viewers could watch them all together as if they were a movie or separately in installments. "They would play them during the summer together, and we kind of took that idea — a whole story but being told in a bunch of different parts," he said, with his brother noting: "You enjoy them more when they’re all together but you can also enjoy them in little bits."

One place the Glovers didn't look for season 2 insight was the previous season of the series. "We didn’t look back at season 1 for inspiration as much because I feel like if you do that as any sort of producer, you tend to be risk-averse, which I really think is bad for art," Donald said. "We didn’t look back and think, ‘What are the things that will make people happy?’ We really just tried to beat ourselves and always just kept trying to do something that was different from the first season."