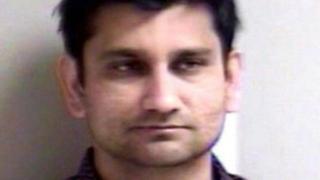 Indian national accused of sex assault on US flight

US authorities have arrested an Indian man after a woman accused him of sexually assaulting her as she slept in the seat next to him on a US flight.

Prabhu Ramamoorthy, 34, was sitting between his own wife and the alleged victim, officials say.

The woman said she had woken up to find her shirt and trousers unbuttoned and the suspect's hand in her trousers.

Mr Ramamoorthy denied the accusations, telling police he was himself asleep after taking a pill.

Mr Ramamoorthy, an Indian citizen living in the US on a temporary visa, was sitting in the middle seat, with his wife on the aisle side and the alleged victim in the window seat.

The flight was on Spirit Airlines, travelling overnight and arriving in Detroit on Wednesday morning from Las Vegas.

Mr Ramamoorthy was held without bail after appearing in a federal court in Michigan on Thursday after prosecutors argued there was a risk he could abscond.

Prosecutors told the Washington Post that he had been charged with aggravated sexual abuse.

The woman reported the incident shortly before the plane landed, according to the police complaint.

Mr Ramamoorthy's wife alleged that the woman had been sleeping on her husband's knees.

She also said the couple had requested a flight attendant seat the woman elsewhere.

But flight attendants told investigators that only the alleged victim had asked for her seat to be changed.

They said she was crying when she came to them and that the buttons on her shirt and trousers were undone. They assigned her a different seat at the back of the plane.

IcetruckJanuary 5, 2018
Like story:
tweet
The Latest: In Paris, Erdogan calls Turkey a ‘state of law’
Wife of Russian man slain in US meets vet who got his kidney