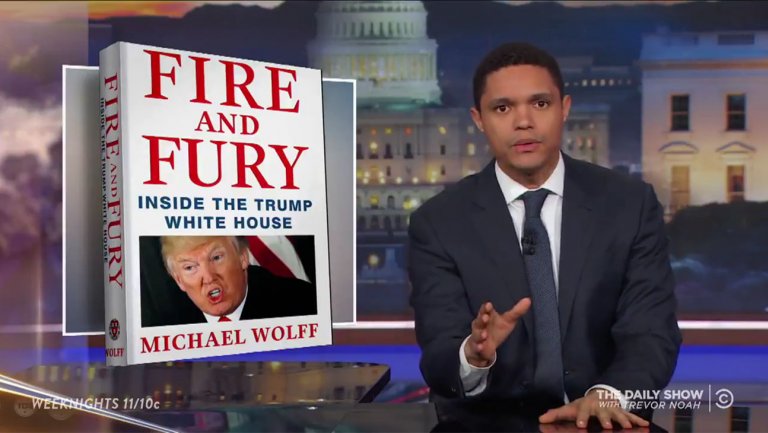 "Trump's own people think he's dumb as a watermelon. I guess the country is not as divided as it seems," 'Daily Show' host Trevor Noah joked.

Late-night hosts poked fun at Michael Wolff's forthcoming Trump White House tell-all on Thursday, in light of response out of the West Wing that the president does not want the book to publish.

The book, Fire and Fury: Inside the Trump White House, which includes many unflattering revelations about the president and his administration, was originally scheduled to publish on Jan. 9, but "due to unprecedented demand" has since been moved up to Friday. Earlier Thursday, the president's attorney, Charles Harder, threatened Wolff and his publisher, Henry Holt, over publication of the book.

On Jimmy Kimmel Live!, Kimmel found the White House's legal threats odd. "Here’s the thing. This is what I would ask Donald Trump: If you don’t want people to read a book about you, why would you take legal action to try to stop people from reading the book about you?"

"I wasn’t going to buy the book," he said. "But now that Trump’s lawyers are going all out to try to stop it from being published – I’m buying twenty copies! I can’t buy enough of these books."

Kimmel added that "the dumbest move" Trump could have made in keeping the book out of the headlines was threatening legal action, unless, "maybe Donald Trump really is the great businessman he says he is and he’s getting a cut of it!"

But, more likely? "He’s just dumb. And everyone around him is dumb," Kimmel joked.

After playing a montage of news clips providing details and quotes from the book, Noah said, "Wow. Trump's own people think he's dumb as a watermelon. I guess the country is not as divided as it seems. Now look, if we're being honest, everyone already knew that Trump isn't the fastest fidget spinner out there."

The host added, however, that the tidbits from the book have helped the country "discover little details that help us understand President Trump a little bit more" — including the fact that he reportedly frequently ate at McDonald's for fear of being poisoned. "So let me get this straight, Trump only trusts food if the people who made it had no idea it was for him? That's why he goes to McDonald's?" the host asked, clearly amused at the thought.

Things got a little racy over at The Late Show, with host Stephen Colbert saying in his opening monologue, "This book is loaded with the dish, including details of Donald and Melania's bedroom habits — don't change the channel," he teased. "It turns out that the president and the first lady have separate bedrooms, the first first couple to do so since John and Jackie Kennedy. Meaning Donald Trump has had just as much sex as JFK has had … in the past year."

"But, if you're concerned that the president might have a mistress, don't worry," he said, before explaining that one of the revelations in the book claims that if Trump did not have one of his regular dinners with since-ousted White House chief strategist Steve Bannon, he was instead in bed with a cheeseburger.

"I'm going to hope [he was] eating it," Colbert joked.

TONIGHT: When the Melania's away, the Hamburglar will play. #LSSC pic.twitter.com/0GYnpXUclT

IcetruckJanuary 5, 2018
Like story:
tweet
Do You Get Enough Sun? Researchers Explain How It Affects Your Health
Australia bushfire dangers laid bare in virtual reality