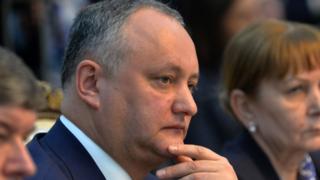 It is the third time that the court has suspended Mr Dodon in three months.

Supporters of the bill say that it would reduce "propaganda" spread by pro-Russian media outlets.

But President Dodon said it was an "blatant act of encroachment on freedom of information."

Moldova has long been caught in a political tug-of-war between Russia and the European Union (EU).

Some experts say the country is embroiled in an "information war" between pro-EU and pro-Russian factions.

While the president is from the pro-Russian camp, parliament and the coalition government of Prime Minister Pavel Filip are controlled by parties from the pro-EU camp.

In a statement on his Facebook page after Friday's ruling, Mr Dodon attacked the bill as "censorship based on double standards" and "an encroachment on Moldovan citizens' freedom of information".

In October, Mr Dodon was suspended by the top court over his refusal to appoint the coalition's choice of defence minister.

On Tuesday, the court suspended him again after he refused to appoint six new members to the country's cabinet.

On both of previous occasions that Mr Dodon was suspended, the constitutional court gave the parliamentary speaker, Andrian Candu, the power to pass disputed bills.