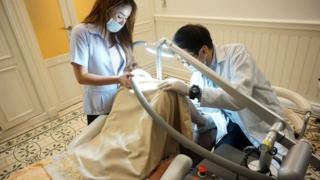 A supposed trend of penis whitening has captivated Thailand in recent days and left it asking if the country's beauty industry is taking things too far.

Skin whitening is nothing new in many Asian countries, where darker skin is often associated with outdoor labour, therefore, being poorer.

But even so, when a clip of a clinic's latest intriguing procedure was posted online, it quickly went viral.

Thailand's health ministry has since issued a warning over the procedure.

The BBC Thai service spoke to one patient who had undergone the treatment, who told them: "I wanted to feel more confident in my swimming briefs".

The 30-year-old said his first session of several was two months ago, and he had since seen a definite change in the shade.

The original Facebook post from the clinic offering the treatment, which uses lasers to break down melanin in the skin, was shared more than 19,000 times within two days.

It included pictures from the treatment room and detailed before and after illustrations.

Comments range from criticism to amusement with some puzzled users asking "What for?" and others having suggestions ready at hand: "It can be used as a torch light. Let it shine!"

One user dismissed the sudden frenzy about shades and colour, saying she was "not that serious about the colour" but was in fact "more concerned about the size and the moves".

Popol Tansakul, marketing manager of Lelux Hospital which offers the service, told the BBC they had introduced vagina whitening services four months ago.

"Patients started to ask about penis whitening, and so we started the treatment a month later," he explained. The cost of the laser procedure is $650 (£480) for five sessions.

It remains to be seen, though, whether indeed there's enough Thai men wanting to have their private parts a shade whiter.

The clinic currently gets an average of 20-30 patients a month coming for vagina and penis whitening with some coming from as far afield as Myanmar, Cambodia and Hong Kong.

"They are popular among gay men and transvestites who take good care of their private parts. They want to look good in all areas," Mr Popol explained.

'Penis whitening is not necessary'

Thailand's Public Health Ministry has already reacted to the sudden attention the clinic has been receiving.

The ministry warned about possible side effects such as pain, inflammation or scars and even effects on the reproductive system and on having sex.

Stopping treatment would cause the skin colour to return to normal and may result in "nasty-looking spots", the ministry said.

"Penis laser whitening is not necessary, wastes money and may give more negative effects than positive ones," Dr Thongchai Keeratihuttayakorn of the ministry said in the statement.

Skin whitening has been a big trend across Southeast Asia over the past decades. Overall, Lelux says more than 50% of its patients are coming for such treatments.

The trend is largely attributed to the lingering traditional perception that having fair skin means not being part of the working class, and not having to work in the fields.

There is an abundance of skin-whitening products on the market and what's caused controversy in the past was usually advertising campaigns to promote these.

A skin-whitening cream, for instance, put an ad above the seats on Bangkok's public transport, saying: "Only white people can sit here."

Another Thai cosmetics firm had to withdraw its video advertising a skin-whitening product after it was attacked on social media for being racist. In the ad, a famous actress attributed her success to her fairer skin.

Yet attitudes about skin colour are slowly changing in the past years.

During the 2014 Miss Thailand World beauty contest, for instance, much comment centred on how dark the winner's skin was compared to typical contestants.

At the time, the model Nonthawan "Maeya" Thongleng said she wanted to encourage all other women who felt insecure because of their darker skin.