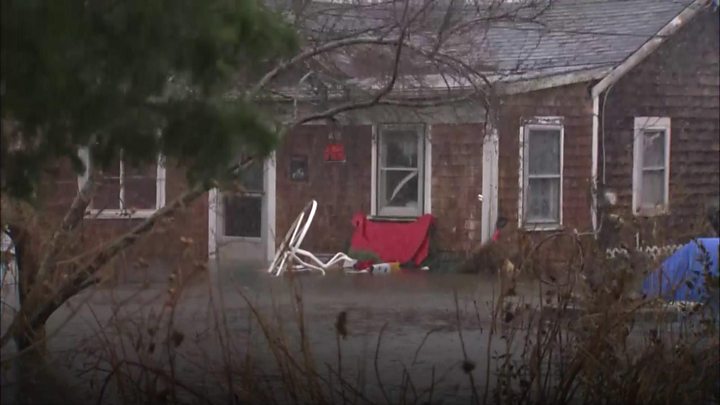 North America's East Coast is shivering in a record-breaking freeze just a day after a deadly "bomb cyclone" dumped snow as far south as Florida.

In parts of US and Canada, temperatures are expected to fall below -20F (-29C), said the National Weather Service.

In Canada, high winds have knocked out power for tens of thousands of residents in Nova Scotia.

The extreme weather has so far been linked to up to 19 deaths in the US and two more in Canada, according to reports.

Four deaths were reported due to traffic accidents in North and South Carolina. Further fatalities occurred in Wisconsin, Kentucky and Texas.

In Philadelphia, a car was unable to stop at the bottom of a steep hill and was hit by a commuter train, killing a passenger in the vehicle.

In Virginia, a girl was fatally struck by a car while sledging, and a 75-year-old man was killed after being hit by a snow plough.

A 13-year-old girl died and 35 others suffered carbon-monoxide poisoning in an apartment building in Perth Amboy, New Jersey, where the temperature averaged 20F (-7C) on Thursday night. Seven of those treated were first responders.

With the snowfall ending, temperatures are forecast to continue plummeting into the weekend as frigid air lingering over the North Pole prowls towards the US mid-Atlantic region.

The National Weather Service said on Friday: "An arctic outbreak will keep temperatures 20F to 30F degrees below average across the north-eastern US.

"This easily reaches the 20 to 30 degree below climatology range which supports a chance for many daily temperature records to be broken."

Experts say the so-called bomb cyclone storm drew moisture and strength from as far south as the Caribbean Sea.

More than 1,200 flights were cancelled on Friday, a day after 4,000 others were grounded.

New Hampshire's Mount Washington, which boasts of having the "world's worst weather", is expecting wind chill to feel like -90F (-67C) on Friday night.

Law enforcement in the US state of Indiana issued a joke warrant for the arrest of the heroine in Disney movie Frozen, blaming her for the cold snap.

Atlantic and central Canada are being walloped by the winter storm.

The provinces of New Brunswick and Newfoundland and Labrador are both under winter storm and blizzard warnings.

Outages have also been also reported in New Brunswick and Newfoundland.

In Massachusetts, Boston received over 1ft (30cm) of snowfall.

The city harbour's tide gauge matched its record at 15.1ft – previously set during the great blizzard of 1978.

"If anyone wants to question global warming, just see where the flood zones are," he said.

The weather pattern has already brought snow to the US South as far down as Florida, where the cold snap has caused iguanas to lose their grip and fall from trees.

Natural gas prices in the US northeast have risen to an all-time high, driven by demand for heating fuel.