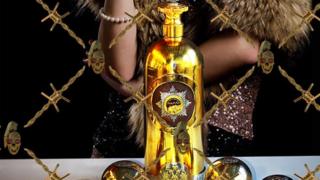 A stolen bottle of vodka thought to be the world's most expensive at $1.3m (£960,000) has been found empty on a construction site, Danish police say.

The bottle, made from gold and silver and with a diamond encrusted cap, was on loan to a Copenhagen bar which had a collection of vodkas on display.

CCTV released on Wednesday showed an intruder, who grabbed the Russo-Baltique vodka and fled the bar.

The bottle was found unbroken on a construction site in the city.

"I don't know what happened with the vodka, but the bottle was empty", Riad Tooba, spokesman for the Copenhagen police, told AFP news agency.

Brian Ingberg, owner of the Cafe 33 bar, said the bottle was still valued at the same price.

"Unfortunately, it's empty. It is one of those working on the construction site that has found it", he told Danish tabloid newspaper Ekstra Bladet.

"I feel fantastic. The vodka god saved us," he added.

Mr Ingberg said he had more of the vodka that was previously in the bottle so planned to refill it and put it back on display.

After it was stolen early on Tuesday, he told broadcaster TV2 that he had borrowed the bottle from the Latvia-based Dartz Motor Company.

"It has been part of my collection for six months, but not anymore," he said.

Russian luxury car maker Russo-Baltique is said to have created the vodka to commemorate the centenary of the company's factory.

The front of the bottle is decorated with leather and has a replica of the radiator guard used for Russo-Baltique cars.

The cap is shaped like a a Russian imperial eagle and is encrusted with diamonds.

Mr Ingberg said the bottle had featured in an episode of House of Cards as a gift from the Russian president to his US counterpart.