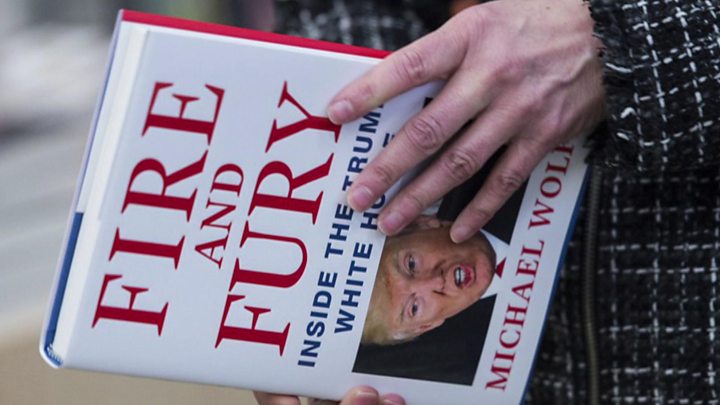 US President Donald Trump has rejected questions raised over his mental health in a bombshell book, describing himself as a "very stable genius".

Michael Wolff's book Fire and Fury: Inside the Trump White House suggests even those close to Mr Trump have questioned his capability.

The US president has dismissed the book, calling Wolff a "loser".

The row has overshadowed a key meeting of Republicans as they try to thrash out their priorities for 2018.

Mr Trump is among those attending, but on Saturday the fallout from the book was again his focus, with the president accusing Democrats and the "fake news" media of "screaming mental stability and intelligence".

What is the Republican meeting about?

The Camp David summit begins two weeks before the end of Mr Trump's first year in office, and seeks to tie up unfinished business by Republicans.

The agenda has not been made public, but the key issues are likely to be:

Money: Or more specifically, how legislators can agree on funding the federal government for the current fiscal year. If they don't do so before 19 January, there is a risk of a government shutdown.

How to win in 2018: Congressional elections are 10 months away, with all 435 seats in the House of Representatives up for grabs, and another 33 in the Senate.

Immigration: Namely, what protection will be given to hundreds of thousands of undocumented immigrants who were brought to the US as children

The opioid crisis: These drugs killed more than 33,000 people in 2015, according to the Centers for Disease Control and Prevention. Mr Trump has promised to address the situation, but his "opioid czar" Kellyanne Conway does not appear to be at Camp David.

IcetruckJanuary 6, 2018
Like story:
tweet
Trump doubles down against ‘Fire and Fury’ book, calling it a ‘work of fiction’
Syria war: Hospitals being targeted, aid workers say