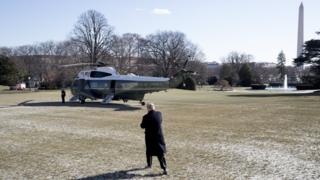 Donald Trump has continued attacking critics over a tell-all book as his party gathers for a key meeting to thrash out their priorities for 2018.

Mr Trump tweeted he was mentally fit, adding that he was a "genius….and a very stable genius at that".

The Camp David summit begins two weeks before the end of Mr Trump's first year in office. It will seek to tie up unfinished business by Republicans, who have rallied around Mr Trump during the release of Wolff's book, Fire and Fury: Inside the Trump White House.

Those issues are reported to include:

Specifically, how legislators can agree on funding the federal government for the current fiscal year. If they don't do so before 19 January, there is a risk of a government shutdown.

Different Republicans have different priorities: for example, Paul Ryan, the Speaker of the House, is keen to address a reform of welfare programmes.

On the other hand, Mr Trump and Mitch McConnell, the Senate Majority Leader, will push for funding to rebuild infrastructure, Reuters news agency reports.

Meanwhile, the Department of Homeland Security was widely reported on Friday to have asked for $18bn (£13.3bn) to complete a section of Mr Trump's much-vaunted border wall with Mexico – though it is unclear if this will be discussed in the latest round of budget talks.

We are 10 months from congressional elections in the US – all 435 seats in the House of Representatives are up for grabs, and another 33 in the Senate.

Kevin McCarthy, the House of Representatives' Majority Leader, is among the Republican leaders who will speak this weekend.

In an interview with Fox News this week, he said that the party of a first-time president always lost an average of 25 seats in the next House election after they were sworn in. The Republican majority in the House is only 24 seats, he warned.

Mr McConnell is expected to address the political landscape ahead of the Senate elections, Associated Press report.

The agenda is not public, but various US media outlets have said the talks will also look at:

What is the latest with the Wolff book?

Fire and Fury went on sale early on Friday, days ahead of its scheduled release, despite the president's attempts to block its publication.

On Saturday morning, Mr Trump posted a series of tweets accusing rivals of trying to throw doubt on his mental wellbeing.

"Throughout my life, my two greatest assets have been mental stability and being, like, really smart," he wrote.

"I think that's well recognised. That's also though why the American people chose him," he said.

IcetruckJanuary 6, 2018
Like story:
tweet
Stylists weigh in on dressing stars in black for the Golden Globes
Iran protests: Students ‘among more than 1,000 arrested’