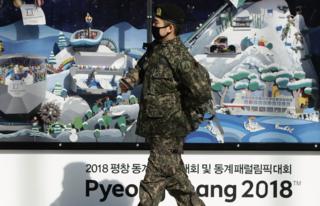 A North Korean Olympic official has said that his country is "likely to participate" in next month's Winter Olympic Games, reports say.

Chang Ung, Pyongyang's representative to the International Olympic Committee, reportedly made the comment at Beijing International Airport on Saturday.

Mr Chang is believed to be travelling to Switzerland to discuss the subject, Japanese news agency Kyodo reports.

It comes a day after Pyongyang agreed to official talks with South Korea.

US President Donald Trump, who has exchanged insults with North Korean leader Kim Jong-un, said the talks showed his "tough stance" had worked. He said he wanted the talks to go "beyond the Olympics".

How did this all start?

During his New Year's Day address, Mr Kim said he hoped that the Pyeongchang Winter Games would be a success, adding that he was considering sending a delegation.

In response, South Korea's President Moon Jae-in proposed a meeting with North Korean officials to discuss the subject in detail.

Mr Moon's proposal and Mr Kim's remarks about the Olympics were the result of two secret meetings between South and North Korean sports officials, which took place in China in late December.

In those meetings, the two Koreas agreed to participate in sports exchanges during 2018.

What are next week's talks about?

North Korea this week accepted an offer to attend a meeting on 9 January that will focus on finding a way for its athletes to attend the Games in South Korea from 9-25 February.

It will be the first such meeting in more than two years and is expected to be held at Panmunjom, the so-called peace village in the heavily guarded demilitarised zone (DMZ) where the two sides have historically held talks.

It is not yet clear who will be attending.

According to an official from South Korea's presidential office, the meeting's priority will be the Pyeongchang Winter Games.

However, he told South Korea's Yonhap news agency that he believed there would also "be discussions related to improving South-North ties after the North's participation in the Olympics becomes final".

The tentative moves towards the Olympic appearance come after months of escalating rhetoric from North Korea and the US.

The leaders of both countries have previously each threatened the other with nuclear annihilation.

Now, as part of efforts to smooth the path to the Olympics, the US has agreed to a request from South Korea to suspend joint military operations, scheduled to take place during the Games.

Earlier this week, North Korea also restored a telephone hotline at their mutual border, to enable the first contact about talks to be made.

Mr Kim has said that sending a delegation to the Games would be "a good opportunity to show unity of the people".

"We hope the two Koreas will sit down and find a solution to lower tensions and establish peace on the Korean peninsula," he added.

While Mr Moon has previously said he sees the Winter Olympics as a "groundbreaking chance" to improve relations between the Koreas, the two countries still technically at war.

What are the doubts?

Some have expressed uncertainty over the significance of next week's talks and the North's possible participation in the Games.

US Defence Secretary James Mattis said on Thursday that it was unclear whether the agreement was "a real olive branch" or a "one-off from [Mr Kim]".

Japan's defence minister said his country would remain vigilant, adding that the North went through "phases of apparent dialogue and provocation" and would continue its weapons programme.

In his New Year's Day speech, Mr Kim said that Pyongyang had "achieved the goal of completing our state nuclear force in 2017", adding: "We need to mass-produce nuclear warheads and ballistic missiles and accelerate their deployment."

North Korea has come under increasing international pressure in the past year over its nuclear weapons programme and repeated testing of conventional missiles.

Mr Moon has said the North's continuing tests would be the backdrop to any new discussions about the Olympics.