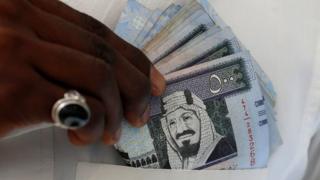 State employees in Saudi Arabia are to be given money to compensate for a new sales tax and a rise in fuel prices.

King Salman has ordered monthly payments of more than $260 (£190) for the next year.

The Saudi government wants to reduce its dependence on oil following recent turbulence in the crude oil market.

The Saudi royal decree says citizens using private health and educations services will be exempt and the state will also pay tax on their first home purchase.

It also says military personnel serving on the front lines with Yemen will also receive a one-off payment of more than $1,000.

Organisations such as the International Monetary Fund have long called for Gulf countries to diversify their sources of income away from oil reserves.

In Saudi Arabia more than 90% of budget revenues come from the oil industry while in the UAE it is roughly 80%.

In 2016 Saudi Arabia announced it was cutting public sector pay to bring down spending, but last year reversed the cuts.

About two-thirds of working Saudis are employed in the public sector. Their salaries and allowances accounted for 45% of government spending in 2015 and contributed towards a record deficit.

Saudi Arabia and the UAE have already taken other steps to boost government coffers.

In Saudi Arabia this included a tax on tobacco and soft drinks as well as a cut in some subsidies offered to locals. In the UAE road tolls have been increased and a tourism tax introduced.