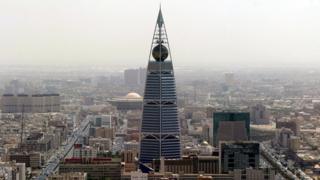 The group were angered by the government's decision to stop paying the water and energy bills of royals, according to the Sabq website.

Saudi officials are yet to comment on the news.

The government is currently attempting a major economic overhaul to reduce its dependence on oil revenues.

Public spending has been targeted, including the lifting of some government subsidies.

The princes, who have not been named, protested outside a royal palace in Riyadh, Sabq reported.

The website also said they wanted compensation after one of their cousins was handed the death sentence for an unspecified crime. They are now awaiting trial, Sabq added.

Another Arabic-language website, Okaz, has also carried the news.

Last year dozens of princes, as well as sitting ministers and ex-ministers, were arrested as part of an anti-corruption drive.

The Saudi royal family is thought to number thousands, but the wealth and status between them can vary wildly.