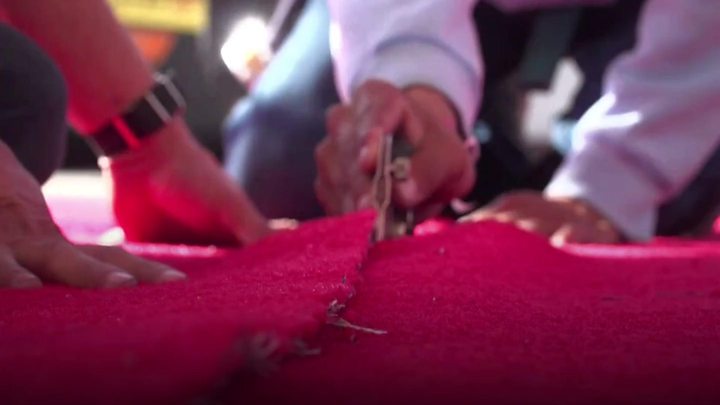 Film awards season gets under way with the Golden Globes later – the first major ceremony since Hollywood was hit by its sexual harassment scandals.

Stars of film and television are expected to wear black on the red carpet in a protest against misconduct.

Acceptance speeches – and host Seth Meyers' opening monologue – are also expected to focus on the issue.

Eight actresses will attend the awards with advocates and activists for gender and racial justice.

As for the awards themselves, Guillermo del Toro's otherworldly romance The Shape of Water has the most nominations of any film, with seven.

Its stars include Britain's Sally Hawkins, who is nominated for best actress in a film drama.

It's also up for best drama film, alongside Call Me By Your Name, Dunkirk, The Post and Three Billboards Outside Ebbing, Missouri.

The best comedy or musical film nominees are The Disaster Artist, Get Out, The Greatest Showman, Lady Bird and I, Tonya.

You can find out more about some of those films here.

US comedian Seth Meyers has said he will address the issue of Hollywood sexual abuse and harassment in the light of accusations made against movie mogul Harvey Weinstein and others.

Meyers told The Hollywood Reporter he had spoken to the women in his life, including his wife, about how to address the topic on stage, saying: "We all agreed it's an opportunity to be able to say some things that you wouldn't be able to see in previous years."

The advocates who will accompany actresses Michelle Williams, Emma Watson, Susan Sarandon, Meryl Streep, Laura Dern, Shailene Woodley, Amy Poehler and Emma Stone issued a joint statement, saying: "Our goal in attending the Golden Globes is to shift the focus back to survivors and on systemic, lasting solutions.

"Each of us will be highlighting legislative, community-level and interpersonal solutions that contribute to ending violence against women in all our communities."

"It will influence everything from Seth Meyers' monologue to impassioned acceptance speeches to the fashion."

Christopher Plummer is among the nominees for best actor in a film drama, for Ridley Scott's film All the Money in the World. Plummer replaced Kevin Spacey in the role of John Paul Getty after Spacey was accused of sexual harassment.

British stars Dame Helen Mirren and Dame Judi Dench are nominated in the best actress in a comedy or musical film category – for The Leisure Seeker and Victoria and Abdul respectively.

They face competition from Margot Robbie, (I, Tonya), Saoirse Ronan (Lady Bird) and Emma Stone (The Battle of the Sexes).

Other British nominees include Gary Oldman, who's tipped to win best actor in a film drama for playing Sir Winston Churchill in Darkest Hour.

London-born Daniel Kaluuya is up for best actor in a comedy or musical for Get Out. Other nominees in the category are Steve Carrell (The Battle of the Sexes), Ansel Elgort (Baby Driver), James Franco (The Disaster Artist) and Hugh Jackman (The Greatest Showman).

Nicole Kidman and Robert De Niro are among the nominees in the television categories.

Kidman and Reese Witherspoon are both nominated for best actress in a limited series for their roles in Big Little Lies.

De Niro is nominated for best actor in a limited series for The Wizard of Lies, alongside Jude Law for The Young Pope and Geoffrey Rush for Genius.

That category is completed by Ewan McGregor, who is nominated for Fargo, and Kyle MacLachlan, for Twin Peaks.

Big Little Lies has six nominations in total – making it the most-nominated TV series this year.

Kidman and Witherspoon are up against Jessica Biel, who is nominated for her role in The Sinner, and Jessica Lange and Susan Sarandon, both of whom are nominated for Feud: Bette and Joan.

The Golden Globes, run by the Hollywood Foreign Press Association, are seen as pointers to the Oscars, which take place on 4 March. The Academy Award nominations are announced later this month.