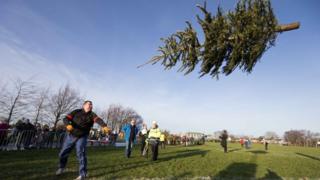 The season of goodwill was firmly put to one side in the Republic of Ireland earlier after hundreds took part in an annual Christmas Tree throwing competition.

A novel way to take down your Christmas decorations, it's also the only event of its kind in Ireland.

Held in Ennis, County Clare since 2012, it's a simple contest. Who can throw a 5ft Christmas tree the furthest?

Whether you're a flinger, a flipper, a hurler or a launcher, a number of techniques can be adopted.

The most common methods see trees hoisted and thrown like a javelin, hammer-style or you can just pitch it from the waist.

John Leahy was the overall winner of last year's Irish title after he beat off stiff competition from more than 200 competitors.

The traditional trophy, put together by Ennis Town Council, is – believe it or not – an old badminton trophy with a badminton racket hanging out of it and a Christmas tree on top.

Based on age-old lumberjack traditions, the 'sport' is very popular in the Scandinavian countries of northern Europe.

In 2014, the town of Keele launched what is believed to be the UK's first Crimbo tree-casting contest.

Fun and games form an integral part of the spectacle, which is also underpinned by a practical message about responsible tree disposal.

"I can't throw one at all as I'm too busy being the MC at the event," he told BBC Radio Foyle.

"Last year we had somewhere in the region of 250 competitors and that includes mums, dads, kids and what we refer to as our hardcore competition people."

"The world record at the moment is 12 metres, our record in Ireland is 10.8. So, we're getting there," Mr Forde added optimistically.

Irish eyes will be trained closely on the host town of Weidenthal to see if they can go one better this time round.